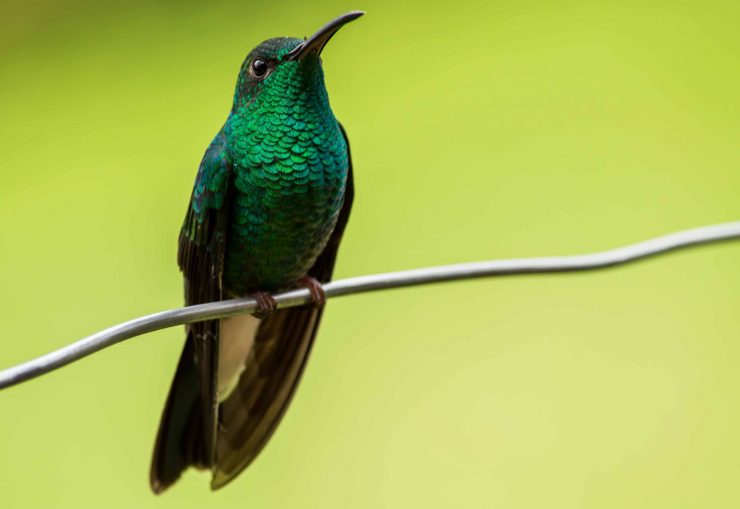 The white-vented plumeleteer is a species of hummingbird in the family Trochilidae and the order Apodiforme.

The male measures around 10 cm and the female approximately 10.7cm. Its bill measures approximately 25 mm, is black, moderately long and slightly decurved. The male is of a bright green hue above and iridescent green below, it has long, white and silky underflow covers. Its tail is long and slightly forked, black blue. The female is smaller, above is green and below is greyish. Its underflow covers and tail are like in the male but with the external rectrices with a broad whitish apex and with a barely noticeable dark underground band.

It is located in central and eastern Panama, Colombia and northwestern Venezuela. In Colombia it is located on the western slope of the Western mountain range up to 900 m above sea level from the valley of the Anchicayá river to the north to the Gulf of Urabá and from there to the east to the region of Santa Marta (1400 m high), the base of the Serranía de Perijá, the valley of the Magdalena River and the lowlands of Catatumbo. Also in the upper valley of the Rio Patía and in the eastern base of the Cordillera Oriental from the department of Arauca to the south to the Serranía de la Macarena.

It feeds on the nectar of the flowers of a great variety of plants among which species belonging to the genera Inga, Calliandra, Trichanthera, Erythrina, Hamelia, Palicourea, Mavaviscus and Aphelandra have been recorded.

It remains alone or in couples in the lower strata of vegetation and on shady forest edges. Occasionally it is found in large trees in bloom along with other hummingbird species.