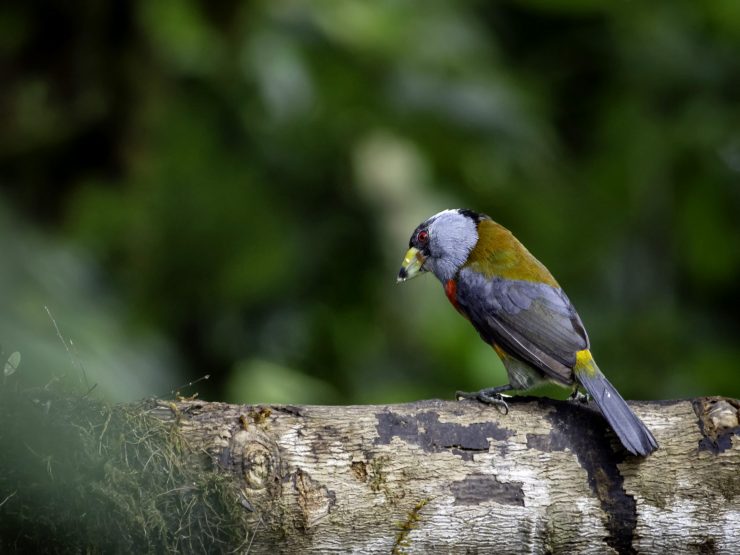 The toucan barbet (Semnornis ramphastinus) is a barbet in the family Semnornithidae native to the humid montane forests of western Ecuador and Colombia.

The toucan barbet is a robust barbet, of medium size and weighing 80-115 g. The beak is robust with a yellow maxilla and a light green mandible, both with dark ends. The plumage is colourful and includes a black crown, «mask» and thin cervical collar. There are long occipital feathers and a conspicuous white stripe behind the eye, which has a bright red-colored iris. The nape of the neck is golden-brown and becomes yellow towards the rump. The throat, upper breast and sides of the nape are grayish-blue. The lower breast and middle belly are bright red, while the lower belly is yellowish green. The wings and tail are grey.

There is no sexual dimorphism; both sexes are almost identical except for the female being slightly less bright.

In the past the species was grouped with the other barbets in the Capitonidae family. However, DNA studies have confirmed that this arrangement is paraphyletic; the New World barbets are more closely related to the toucans than they are to the Old World barbets. As a result, the barbet lineages are now considered to be distinct families, and the toucan barbet, together with the prong-billed barbet, is now placed into the separate family Semnornithidae.

In 1988, a close phylogenetic relationship between the genus Semnornis and the family Ramphastidae was suggested. The genus is now considered the sister taxon of toucans, but still more closely related to the New World barbets.

The species is native to the humid forests of the western Andes, from the Andean slopes of northwest Ecuador to southwest Colombia, at altitudes of 1400–2400 m. It uses all forest strata, shwoing some preference for the upper canopy of the forest (11–20 m) and the subcanopy (610 m). Evidence suggests that these birds are very specific when it comes to choosing trees for nesting. They usually prefer old trees in the Lauraceae family. As nesting trees of sufficient diameter are not very common in these forests, habitat loss through logging is impacting the species.

The toucan barbet is usually found in pairs or small groups perched silently on long horizontal branches, making them hard to find unless active or singing. It is a territorial bird that usually lives in small groups of 3-6 individuals. In the absence of interference these groups can occupy a certain territory for a year or longer. It sometimes forms mixed flocks with tanagers and other frugivores. The flight is characterized by being hurried and noisy.

The species is frugivorous, feeding on a variety of fruits. The fruits of Cecropia trees have been shown to be especially important as food sources. At least 20% of food intake consists of insects, and nectar, tree sap, and flower petals are also taken.

The toucan barbet is unusual among frugivorous birds in that it breeds cooperatively, with several helpers aiding the dominant breeding pair with incubation and raising the young.[4] Groups are larger outside the reproductive season but generally shrink to three individuals in season, usually composed of previous immature offspring that stay with their parents and help with the new hatchlings. After the breeding season, the group increases due to greater acceptance of non-family members. These helpers significantly increase the reproductive success of the breeding pair.

The toucan barbet roosts and nests inside cavities and holes in tree trunks that it carves out with its powerful beak. The incubation period lasts 15 days, and the hatchlings fledge after 45 days. Juveniles look very much like adults, but have paler colors and a black iris. Juveniles’ plumage is kept for at least two months.

Territories range between 4.0 and 10.6 ha, with an average of 5.8 ha. Most of the territory will consist of mature forest, although the species can adapt to live in forests with small areas of secondary forest or pastures. Toucan barbet groups show a marked territorial behavior towards other groups or species, which is usually made clear by the loud duets of breeding pairs. The territory is actively protected by the breeding pair by chasing of intruders; the helpers assist in this, especially near the nest.

The species is classified as Near Threatened by the IUCN. Even though still fairly common locally, its populations have decreased due to habitat loss, accelerated by massive logging operations, deforestation, cattle grazing, and mining; and illegal animal traffic, as it is trapped for the local and international cage-bird trade.

Toucan barbet songs are unmistakable, composed of loud shrieks that travel long distances. It is usually sung in duet by the breeding pair, simultaneously or in syncope by both sexes during the breeding season, usually for territorial display. The songs change with each season, being more common at the beginning of the year and declining in frequency after April. The toucan barbet can also produce clicking sounds.