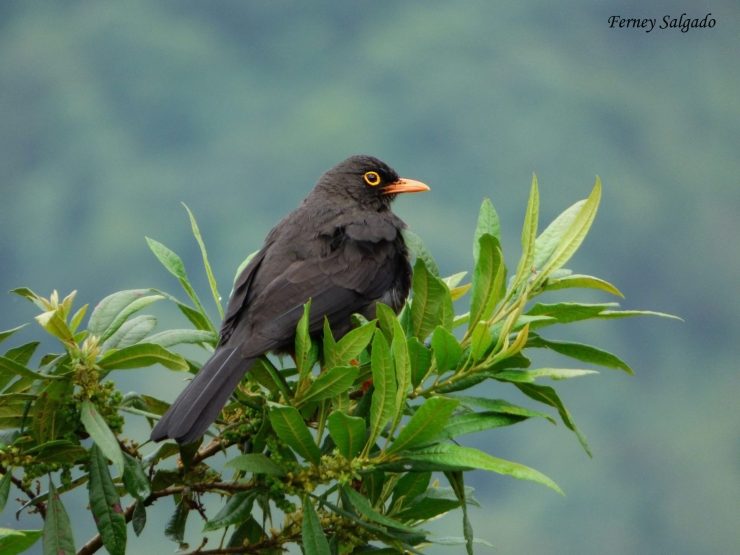 The family Turdidae are medium to large passerines. They generally have a long, strong bill and strong legs. The colour of their plumage is very variable. Many are entirely in discrete shades of brown, gray or black but others show bright colors on or under, blue, red, orange. Plumage may be uniform or spotted or streaked. They are cosmopolitan and inhabit all habitats, from the most open to the dense forest. Their diet is insectivorous and frugivore.

The great thrush t is measures around 30 centimeters.

Both sexes are identical but the female does not have an orbital ring. In adults, the head and face are very blackish brown. The cheeks and the region that goes from the loral to the eye are black with a very thin yellow or orange orbital ring. The nape of the neck, the top of the mantle and the subcaudal covers are dark brown with a slight olive or greyish olive shade. The wings and tail are darker or blacker. The outside of the large covers, the alula and the primary covers are clearly black. The wing underwings are the same colour as the flanks, but may be edged with pale or dull orange. The chin is whitish turning grey on the throat, it is vaguely striated of black. The rest of the lower parts are lighter or greyish brown, especially on the center of the belly. The bill varies from orange to orange-red, the legs and feet are yellowish orange or brownish yellow.

It is found in Bolivia, Colombia, Ecuador, Peru, and Venezuela. It is considered as the largest thrush in South America.

It is distributed between 600 and 3500m, mainly above 2000m. It is located at the northern end of the Cordillera Occidental, in the Sierra Nevada de Santa Marta, the Serranía de Perijá and both slopes of the Cordillera Oriental up to the departments of Santander and Boyacá, and most of the Valle del Magdalena up to the south of the Huila.

The great thrush’s size distinguishes it from the several other uniform slaty-colored thrushes in its range. It inhabits subtropical or tropical moist montane forests and high-altitude shrubland, but can also make use of degraded forest and urban areas.

It feeds in couples or in families especially on the ground although it can rise up to the canopy. It is a big seed scattered. Forage rummaging between leaf litter or in low vegetation to catch insects and spiders. It also consumes earthworms, snails, snakes, frogs, lizards and mice. There are records of predation of smaller bird nests.