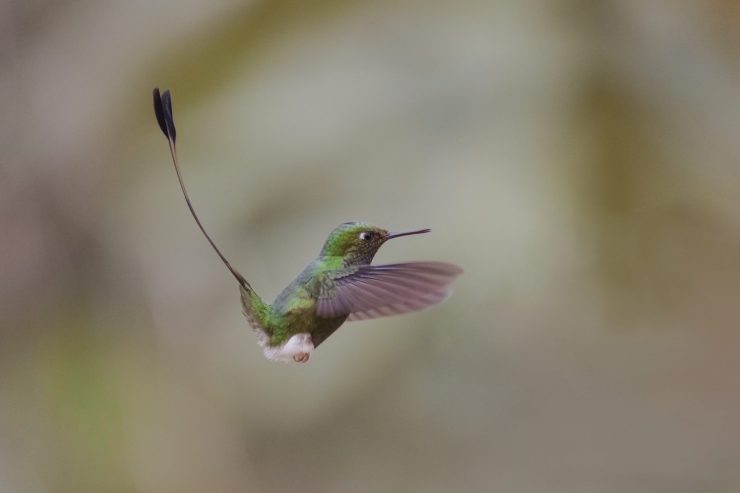 Etymologically the word Ocreatus refers to the white feathers on the legs of this hummingbird, and the epithet underwoodii was coined in honor of the naturalist C. F. Underwood.

Small black-billed hummingbird, short (13mm) and straight. The male is about 12 cm long and is easily recognizable by its long tail of approximately 8 cm that ends in the shape of a racket. The body is mainly bright green, with an iridescent green throat and breast. In addition to its tail, there is also abundant white down on its legs.

The female is quite different, with a relatively long and forked tail but without the male’s snowshoes. Its back is green, it has a white point behind the eye (also the male), a coppery forehead and white abdomen and chest with green points. It also has white tibial feathers that despite being smaller are evident.

The female may resemble the female      Rufous-vented Whitetip (Urosticte ruficrissa) and the Purple-bibbed Whitetip (Urosticte benjamini), but she has prominent white tibial feathers, she is smaller and has a shorter bill. Due to the pattern of the tail, the male of this species can be confused with the male Silfos (Aglaiocercus Kingi and Aglaiocercus coelestis), however the latter are larger and their tail does not have a racket ending.

Six subspecies are recognized, at least three of them present in Colombia. O.u. wnderwodii of the Eastern Cordillera, O. u. discifer, from Northeast Colombia and Northwest Venezuela, O.u. ambiguous of the Central and Western Cordillera.

It is distributed from Venezuela, through Colombia, Ecuador and Peru to Bolivia. In Colombia it is present in the three mountain ranges of the Andes with a wide altitudinal distribution that ranges from 850 to 3100m above sea level. However, it is most common between 1500 and 2500m high. It is also found in the Serranía de la Macarena and the Serranía de Perijá.

This species lives in humid, very humid and rain forests. It can be found both in primary forest and in secondary growth vegetation and forest clearings where it uses all the vegetation strata.

It feeds mainly on the nectar of short corolla flowers, such as those of some ericaceae such as Disterygma, Macleania, Cavendishia and Psammisia. Less frequently, they also include insects in their diet.

In southwestern Colombia, reproductive events have been recorded between the months of January and April, but it seems that it can reproduce throughout the year in other regions of the country. The clutch size is two eggs, which the female incubates between 16 and 18 days. The chicks are born dark with brown down on the back and remain in the nest between 19 and 22 days.

Its flight resembles that of a bee due to its noise and zigzagging. These birds hover in flight while sucking nectar from flowers or clinging to their petals while feeding. Also, it has been reported that this species can behave as a secondary nectar stealer by illegitimately accessing the nectar of Maclenia bullata (Ericaceae) flowers, through perforations in the calyx made by primary stealers. In the understory it has solitary habits, while in the canopy it forms groups with other species around flowering trees such as Inga sp. and other legumes with similar inflorescences. It makes altitudinal migrations in various regions and frequently ventures into larger hummingbird territories, from where it is aggressively displaced. The male and female are equally aggressive, with no apparent dominance of one sex over the other.

The Peruvian subspecies, annae and addae were previously considered as distinct species.