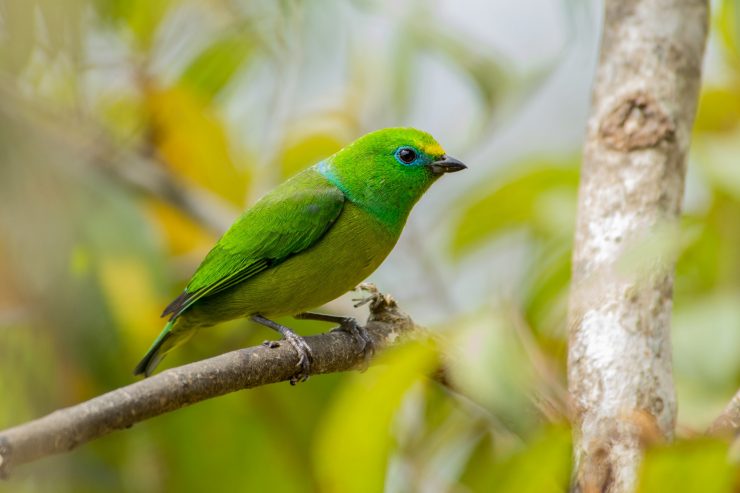 The Blue-naped Chlorophonia is a bird which belongs to the family of Fringillidae and the order of Passeriformes, its measures around 12 centimeters.

It is a bird characterized by its two typical colours green and blue.

It is a plump bird, with short neck and tail, short beak and wide. Head, throat and chest with bright green. Iridescent blue orbital ring as well as back and rump. The wings and tail are green, the lower chest and the lower greenish yellow parts. as for the female is like the male but more opaque, with the back green, only collar nape blue and rump too.

It is usually a rare bird and spreads over the 1000 and 2100 m of height. It is located in the Sierra Nevada de Santa Marta (psittacina), Serranía del Perijá and middle valley of the Magdalena from the Serranía de San Lucas to the headwaters of the Valley. Also on the Pacific S slope to the Valley and on the E slope in the Valley. Also in Guyana, Venezuela and the Andes to the NE of Argentina, as well as the SE of Brazil and in Paraguay.

It is found on the edges of tropical and humid subtropical forests, very common in Santa Marta, with a medium dependence on forests. It has a strong relationship with plantations and with rural gardens.

It feeds mainly on fruits sometimes of some insects. They take advantage of cultivation and gardens where they get fruit from plantations or from places where people leave food for birds.

It is a bird that walks in couple or in small groups, usually in the treetops and very little has been seen with mixed flocks, they are not so active.https://www.xeno-canto.org/species/Chlorophonia-cyanea