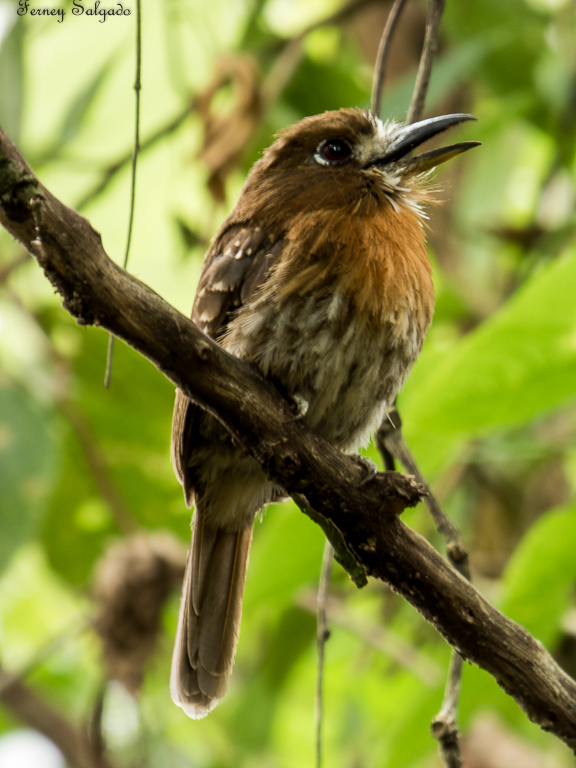 Silent bird that lives in low strata of humid forests. Its name Malacoptila means soft plumage and derives from the Greek roots malakos = soft and ptilon = plumage. His epithet mystacalis means mustache and comes from the Greek mustax, mustakos.

It measures 20 to 23 cm and weighs 47 to 50 g. It has a black bill with most of the lower jaw bluish, red iris, dark eye ring, and silver-blue legs. The male is brownish-brown above with a white patch around the loreal area and at the base of the forehead. It has a blackish patch above the nostrils, its ear-coverts are brown with white streaks, it has white malar whiskers surrounded by brown, and long pale rufous chin feathers. Their upper parts have white spots or before which they become longer and in a row on the wing coverts. It also has a barred back and uppers, a long, graduated brown tail with buff tips. Its throat and chest are pale rufous in color with dark streaking on the lower edge, the lower part of its flanks are pale brown with whitish baring and streaking, and the center of its abdomen and undercaudal-coverts white. The female is more grayish and dull brown above, more strongly marked with buff above and on the ear-coverts, has a paler chest and is more marked below. The immature ones have a shorter and darker bill, have darker markings all over their body and little rufous underneath.

The White-whiskered Puffbird (Malacoptila panamensis) is slightly smaller, has a yellow lower jaw, striated sides of the head, and a whitish under breast and belly with brown striations. In the extreme south of the Eastern and Central mountain ranges it can be confused with the Black-streaked Puffbird (Malacoptila fulvogularis) which has a black bill and is quite striated in upper parts.

It inhabits the understory of humid and very humid forests, especially in dense places. Sometimes found in ravines, forest edges, and in open wooded areas.

Hemiptera, orthoptera, coleoptera, spiders and fruit pulp have been recorded in stomach contents.

It is a not very active and quite confident bird that generally perches at low altitudes in the understory. It captures its prey in the foliage or the ground by means of flights from a perch to which it usually returns. Sometimes it follows ant marches and joins mixed flocks.

It could form a superspecies with M. fulvogularis and M. panamensis. Some authors consider that the populations of the southwestern part of the country could merit classification as a different subspecies.

In the international concept, it is considered a kind of minor concern.