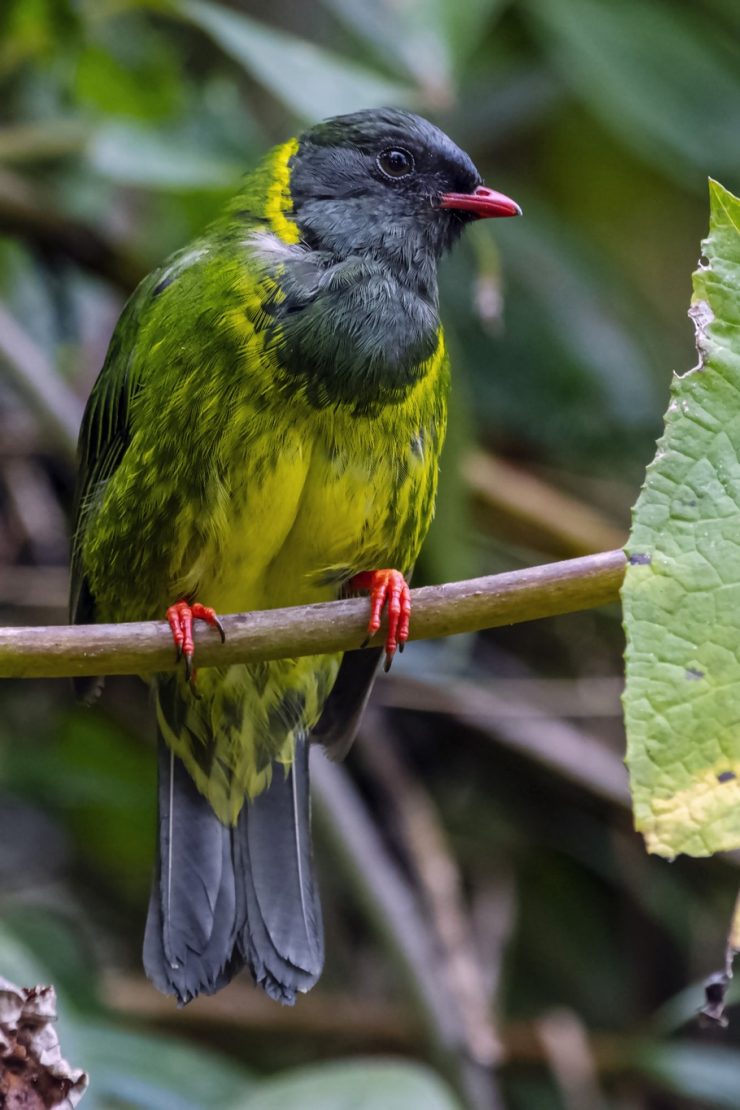 The name of this species (Pipreola) is a diminutive of Pipra, a Greek term used to refer to a small bird. While his epithet riefferii was established in honor of the collector Gabriel Rieffer.

Bird of approximately 20cm in body size with orange-red bill and legs. Males have a glossy black head and high chest delimited by a yellow band. The chest and abdomen is yellow with green spots and the back is totally green with blackish tertiary feathers and white tips. Females have a similar coloration pattern, but with a dark olive green head and tall chest.

Similar to the Black-breasted Fruit Bowl (Pipreola lubomirskii), but the male of the latter without a yellow band bordering the sides of the head and chest and with greenish legs, not orange-red. The female of F. Pechinegro is smaller, the legs are green and it has light green plumage.

Currently six subspecies P. r. riefferii, P. r. occidentalis, P. r. melanolaema, P. r. confusa, P. r. chachapoyas and P. r. tallmanorum, which differ in size, shape of the black hood, and the amount of green in the spots on the lower parts of the male.

This species is found in Venezuela, Colombia, Ecuador and Peru. In Colombia it is distributed from 900m to 2700m above sea level in the three mountain ranges.

It inhabits humid forest, frequently on forest edges and in forests in secondary succession.

It feeds mainly on fruits, some of them on species of the Chloranthaceae (Hedyosmum sp.), Ericaceae and Melastomataceae families. Like other cotingas, it can eventually include food of animal origin.

Its reproduction occurs between January and July in the Central and Western mountain ranges. The nest is a cup built with moss and small roots on bushes 1 or 2 meters high. Lays 2 creamy eggs with reddish brown dots.

It is usually seen in pairs or in family groups. It moves silently between the understory and the middle level of the vegetation where it eats perched fruit or captures it through sustained flight. Sometimes it follows mixed flocks.

Some authors consider that the subspecies P. r. tallmanorum should be assigned species status.

Its state of conservation is of least concern.