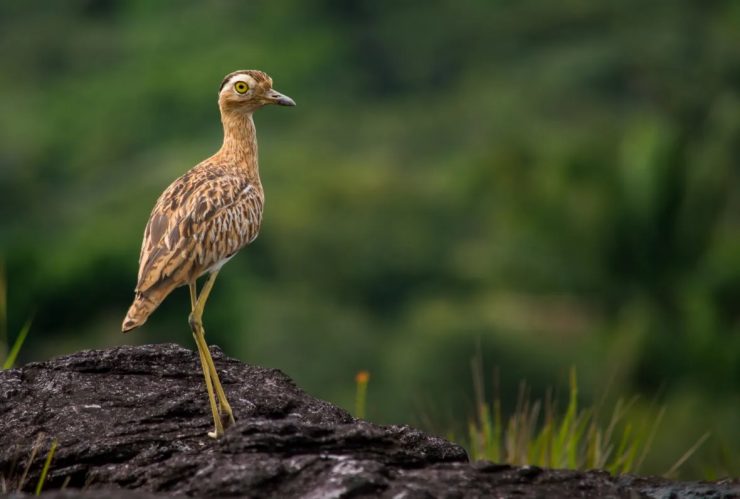 Bird of activity mainly twilight and nocturnal. It lives in dry areas in the north of the country and east of the Andes. Its name Burhinus means ox beak and derives from the Greek roots bous = ox and rhinos = beak. Its epithet bistriatus means double striated and derives from the Latin roots bi = double and striatus = striated.

It is 43 to 48 cm in length, it has a neck and long legs and its head has a long white superciliary groove bordered above by a black line. Its eyes are yellow and its beak is short and robust. Their upper parts of the head and chest are dark brown with streaked tawny. It has a white throat and belly and when in flight it exhibits a wide white wing list and a narrow white subterminal band on the tail. Juveniles are paler than adults with buff head and neck.

Four species are recognized B. b. bistriatus, B. b.dominicensis, B. b.padiacus and B. b. vocifer, the last two are in Colombia.

It is found from southern Mexico to northwestern Costa Rica and from northern Colombia to the extreme north of Brazil. In Colombia it is found below 500 m above sea level on the Caribbean Coast from Cartagena to the east to La Guajira and south to the upper Magdalena Valley. It is also found east of the Andes to the south of Meta and the Guaviare River.

It inhabits shrubby savannas and open grasslands in arid and semi-arid areas. It is also found in cultivated areas and prefers flat soils with or without scattered bushes but essentially open in character.

It feeds on small prey such as insects, earthworms, mollusks, and sometimes lizards and small rodents.

Its reproduction period coincides with the dry period of the year. In Colombia, young individuals have been registered in the months of April and May in the northeast of the department of Meta and individuals in reproductive condition in May in the eastern Sierra Nevada de Santa Marta. Its nest is scrabbled in the ground among the droppings of animals. The size of its position is two eggs which incubate for 27 to 29 days by both sexes but mainly by the father.

They remain solitary in pairs or in loose groups and are birds of mainly twilight and nocturnal activity. Sometimes it is observed running short distances and when it is done on the ground it does so to avoid detection. It is generally seen feeding on bare road soils where the prey is more exposed and can be seen more easily.

The breed proposed under the name vigilans is a synonym for the bistriatus breed.