How birdwatching changed in the 2010s 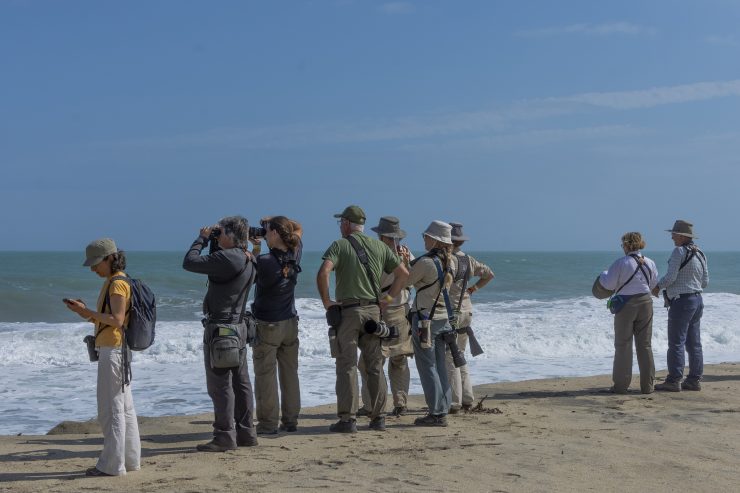 As 2020 arrives, we have reached the end of a decade that saw lots of changes in the birdwatching community while the threats to the birds we love continue to become increasingly dire. Today, we’re taking a look back at the last 10 years in birding, and we’re doing so in three parts:

Part 1, below, looks at how the hobby of birding has changed in the 2010s.

Part 2 looks at how the birding community has changed this decade.

Part 3 looks at how the climate crisis is affecting birds and how our understanding of climate change has developed since 2010.

Birdwatching changed in a variety of ways in the 2010s, from how we watch birds to how scientists study them to how birds have become an increasing part of mainstream culture. While this isn’t an exhaustive list, here are five things that stand out from the last decade.

It used to be unusual for most birders to carry cameras in the field. Now, however, many birders use cameras as much as they do binoculars. Contributing Editor Kenn Kaufman points to two ways camera use has changed the hobby:

“One is the fact that now many people are getting into birding by way of bird photography — taking pictures first and then wondering what species they’ve got. That never would have happened in the past, before great telephotos and compact superzooms, when bird photography was a lot harder than it is now. The other is that serious birders are turning more and more to the use of photography to identify birds that can be tough under field conditions, like flyby jaegers or Accipiters.”

Contributing Editor David Sibley echoes Kaufman, noting: “Camera use is changing the way we identify birds, sometimes by details that are simply not detectable in real time or by sets of features that differ from the approach used by eyes alone. It’s hard to give specific examples, but I sense a significant shift. Also, the fact that with photos there are far fewer debates over the ID of a bird that just flew by. It used to be that everyone watched the bird and then compared impressions and arrived at a consensus ID. Now most birds are photographed, and discussion still happens, but more centered on whether the ID can be confirmed or not. Several recent Wedge-rumped Storm-Petrel records off California were not detected in the field and were discovered only in photos.

“And because so many rare birds are photographed, and in such detail, we know that the same Great Black Hawk went from Texas to Maine, and the same Black-backed Oriole went from Pennsylvania to Massachusetts. The combination of cheap zoom photos and Facebook has led to the discovery of a lot of rare birds that would been missed ten-plus years ago. And the ABA’s What’s This Bird group has turned up a number of rarities in the last couple of years.”

2. The increasing influence of eBird.

“Certainly, one of the biggest developments in birding over the last decade has been the increasing influence of eBird,” Kaufman says. “Although it was launched for North America in 2002, it didn’t go global until 2010, and in the time since it has become the international language of serious birding. For traveling birders, it’s incredibly helpful for finding hotspots, seeking reliable locations for elusive birds, and finding active birders in new locations.

“It’s also useful for people writing about bird status and distribution. I find myself looking things up on eBird constantly — things like: Where were Pine Siskins reported in November this year, as opposed to November last year? What’s the general pattern of Prairie Falcons east of the Mississippi?

“Some people put too much faith in what’s reported in eBird. For example, it doesn’t include every record of rarities, and it’s no substitute for a records committee report for such details. But for general patterns it’s extremely helpful and becoming more so.”

The ability to follow individual birds and recreate their migration routes with technology has developed considerably in recent years.

“We have made many advances in migration tracking technology in the past ten years, allowing scientists, conservation organizations like Audubon, and our partners to follow individual birds as they move around the world,” says Jill Deppe, Senior Director of Audubon’s Migratory Bird Initiative. “They show us what places birds need, today and tomorrow, and how they are connected to one another. These technologies have revealed tremendous insight into the movement of songbirds, shorebirds, and other birds that are too small to carry satellite or GPS transmitters.

“For example, light-level geolocators, or geologgers, utilize the principles of solar geolocation to track birds. For any given day, the time of solar noon varies across longitudes, and the length of daylight changes across latitudes. Geolocators record this information, allowing scientists to estimate a bird’s location on the Earth. Using this technology scientists demonstrated that Blackpoll Warblers travel for three days straight across the Atlantic Ocean as they migrate from northeastern North America to South America in the fall.

“Another frequently used technology is radio-telemetry. Although it has been used to manually track birds since the early 1960s, radio telemetry has received important upgrades that allow us to track smaller birds over much larger areas. As a research scientist, and prior to joining the National Audubon Society as the Senior Director of the Migratory Bird Initiative, my collaborators and I used an automated radio telemetry network to track Swainson’s Thrush and other small songbirds across the Gulf of Mexico during fall migration. Contrary to the long-held idea that the gulf is a geographic barrier to songbirds, we discovered that the probability of survival for thrushes crossing it can be surprisingly high, over 90%. The key to a bird’s success is access to high-quality feeding habitat and good weather. Over the last decade, Birds Canada and its partners have created the Motus Network, a system of automated receiving towers spanning the Western Hemisphere, which significantly improves our ability to track birds across the annual cycle. Using Motus, scientists have learned that the quality of habitats occupied by small birds during migration and winter influences their rate of migration and migratory routes, demonstrating the interconnectedness of the different periods of the annual cycle.

“These technologies and more have led us to an era of exponential growth in migratory bird data. How we begin to access and use these data will be the story of the next decade, which is where Audubon’s Migratory Bird Initiative will lead the way.

“By partnering with like-minded organizations such as the Cornell Lab of Ornithology, Smithsonian Migratory Bird Center, and our partners across the Western Hemisphere, Audubon will bring together all of these amazing migratory bird data that technological advances of the past decade have brought us. We will use this information to define where and how to focus Audubon’s conservation investments in order to protect, restore and manage key habitat and also mitigate threats along full migratory pathways for these species.”

4. Birds and birders at the movies.

Jordan Rutter, director of public relations at American Bird Conservancy, pointed out the variety of ways we’ve seen birds and birders featured in mainstream and pop culture in the last decade. In 2019, the boardgame Wingspan became a huge hit, opening up the birding hobby even further.

And while birds and birdwatchers have been the subjects of movies and TV shows for decades, the number and variety of birding-related films this decade has been impressive. We’ve had the big-screen feature The Big Year (2011), starring Jack Black, Steve Martin, and Owen Wilson, and the 2013 coming-of-age-film A Birder’s Guide to Everything; documentaries like Birders: The Central Park Effect (2012), The Penguin Counters (2015), and the 2019 Netflix films Birders and Dancing with the Birds; and the animated films Legend of the Guardians: The Owls of Ga’hoole (2010), Rio (2011), and Rio 2 (2014).

Yes, the challenges facing birds are as great as ever heading into the 2020s, but we can’t forget that birders and scientists work every day to improve prospects for our feathered friends. Just in the last few months, for example, the Kirtland’s Warbler was delisted from the federal endangered species list, and New York City adopted new rules to make buildings less dangerous to birds.

Our friends at BirdLife International also shared this list of 10 ways the world’s rarest birds have been saved in the last decade.