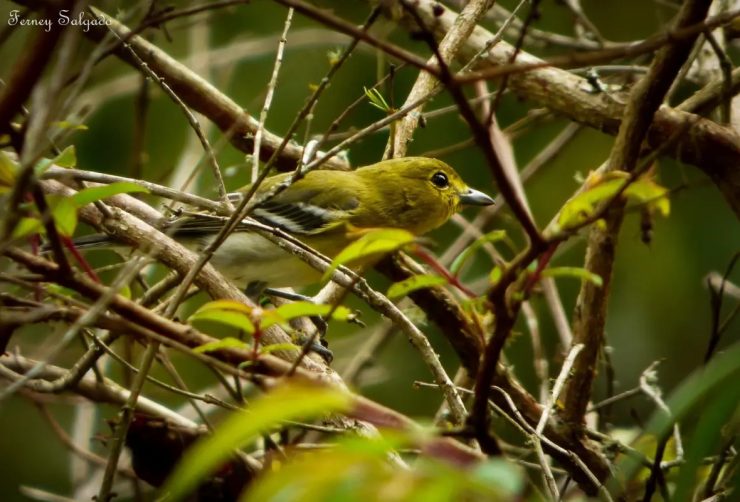 The Yellow-throated Vireo is a rare migratory species found in Colombia from the beginning of December to the end of March. Within the family vireonidae it is one of the species with the brightest colors. Its name Vireo derives from Latin which means small green migratory bird. Its epithet flavifrons derives from the Latin flavus which means yellow and frons in front, referring to its appearance.

Greenfinch of 14 cm in lenght and approximately 18 g in weight, does not exhibit sexual dimorphism. It has a dark gray jaw, blue-gray jaw, and gray legs. The upperparts are bright olive green with the scapulars and rump slate gray. Its tail and wings are black, the latter with two primary white wingbars and edges of the secondaries of the same color. The belly and under the tail is white and its throat and chest are yellow. A distinctive feature of this species is the yellow spectacles. Juveniles are similar to adults but olive brown above and with a pale yellow throat and chest.

Difficult to confuse due to the combination of yellow glasses and white wing lines.

Subspecies are not recognized.

It is a migratory species that breeds in North America and winters from Mexico to Venezuela. In Colombia it has been recorded up to 1600 m above sea level in Santa Marta, La Guajira and the northern part of the three mountain ranges, up to Norte de Santander in the Eastern mountain range, up to Quindio and Tolima in the Central mountain range and up to Valle del Cauca in the Western Cordillera. It has also been recorded in Putumayo and Vaupés.

In Colombia it lives in open areas, forest edges, low scrub, clear mountains and secondary forest. In the rest of its winter distribution it is found in a wide variety of habitats such as stream edges, rivers, swamps, roads, parks, and cities with tall deciduous trees. Although it is considered a species with a preference for forest edges, for reproduction it requires continuous forests.

Their diet consists mainly of arthropods such as moths, butterflies, grasshoppers, beetles, flies, and wasps. At the end of the summer and autumn you can include fruit in your diet.

The nest is made with strips of plant material, wasp nest material and leaves, which are joined with spider web. On the outside they are covered with lichens, spider egg debris and sometimes with pieces of paper. The shape of the nest is a rounded crown which is suspended on a branch near the trunk of deciduous trees. The female is responsible for the construction of the nest and lays 3 to 5 eggs, white, slightly shiny and with brown spots. In the incubation that lasts two weeks, both parents participate and the chick remains in the nest for approximately 15 days, being fed by both parents.

They are generally observed solitary and sometimes mixed flocks can follow. In their breeding areas they feed from the middle to the upper part of deciduous trees.

Formerly located in the genus Lanivireo along with Vireo solitarius.

This species is in the category of least concern, because it has a wide distribution range and the population trend is increasing.