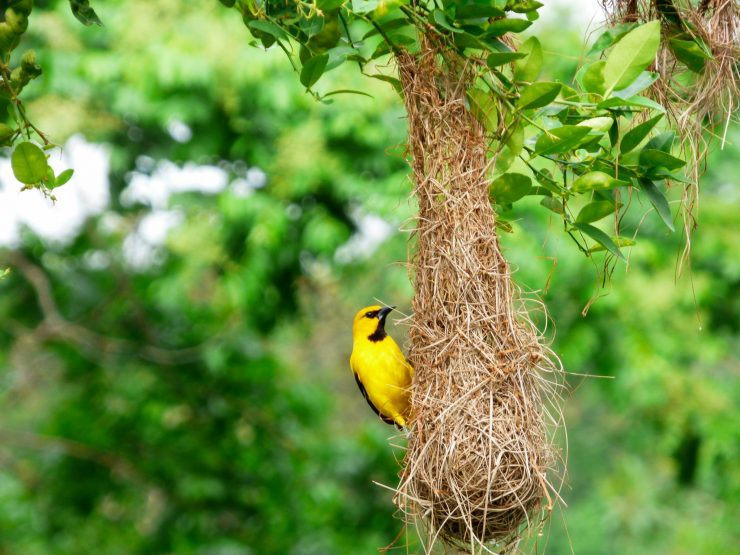 It is a conspicuous species that lives in dry areas mainly in stubble forests, cultivated areas and forest plantations. It feeds mainly on insects that it captures by jumping and exploring on the foliage, supplementing its diet with fruits and nectar. Its name comes from the Greek ikteros which means yellow, and its specific epithet nigrogularis means black throat, which comes from the Latin roots niger = black and gularis = neck.

It measures between 20 – 21cm. The males have an average weight of 39.5 g and the females 37.4 g. Its plumage is mainly lemon yellow with the eye region, bib, wings and tail black. It has a narrow but sharp white wing bar and the margins of the inner remiges are whitish. Juveniles have a duller and greenish plumage, sometimes without a black bib or flange, but almost always with a white wingbar.

Very similar to Yellow-backed Oriole (Icterus chrysater) but less robust, with a more lemon color and in any plumage it shows a single white wing bar. Other Colombian orioles have black on their back.

It is considered a monotypic species for Colombia. Four subspecies are recognized (I. n. Nigrogularis, I. n.curasoensis, I. n. Helioeides, I. n. Trinitatus), of which one is found in Colombia: I. n. nigrogularis.

It is found up to 3000 meters above sea level in the lower Sinú Valley. To the East through the Caribbean lowlands to Guajira and south through drier regions of the valleys of the lower, middle and upper Magdalena, passing through Puerto Berrío Santander to Tolima. It is also found in the east of the southern Andes to the south of Meta and east of Vichada.

It lives in forests, stubble, cultivation areas and forest plantations, but they prefer dry areas instead of humid regions. It is the most common orioles in the Santa Marta area, even in mangroves.

It feeds mainly on insects (Coleoptera, Orthopteros, and Dipteros), which it searches in the treetops and among the flowers. It also consumes other arthropods such as spiders and solifuges (Solifugae). It complements its diet with fruits (Malphigia punicifolia and Phoenix dactylifera) and nectar (Erythrina fusca and Pithecellobium saman).

They build nests in the shape of an elongated bag that hang from the branches of trees, they are woven mainly with vegetable fibers, especially grasses and palm fibers. These nests are 25 to 50 cm long and 11 cm in diameter at the widest part. The clutch size is 2 to 3 eggs, which are white to bluish-white with purple-black spots, distributed mainly on the widest base of the egg. The eggs have an average dimension of 24.6 x 16.6 mm.

It is kept in pairs or trios, but occasionally solitary. Jump and explore in the foliage or visit flowering trees from low altitudes to the canopy.

His state of concern is less.