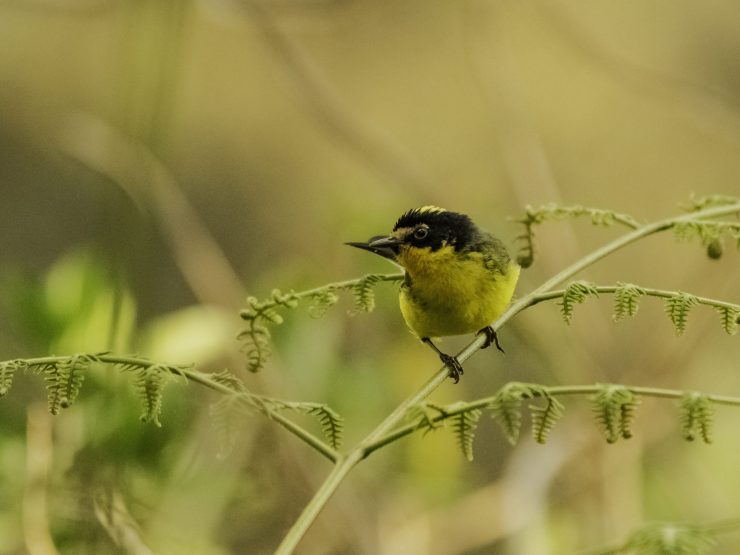 The Yellow-crowned Whitestart is ENDEMIC from the Sierra Nevada de Santa Marta. He is conspicuous and confident. It spreads its tail as it jumps and flutters through the foliage in search of insects. Myioborus derives from the Greek muia = fly and boros = devourer. The epithet Flavivertex refers to the color of its crown and derives from the Latin roots flavus = yellow and vertex = crown.

It measures 14 cm. It has black sides of the head with a conspicuous yellow patch in the center of the crown. It has a yellowish front and flanges and is mainly gray above with an olive green patch on the back. Its underparts are bright yellow and the tail is black with conspicuous white outer rectrices.

It is very similar to the Slate-throated Redstart but it has a dark gray throat and chest and lacks a yellow crown.

Endemic to Colombia. It lives between 1,500 and 3,000 meters above sea level in the Sierra Nevada de Santa Marta.

It is very common to see it in humid forests, clear mountains and forest edges.

This species is mainly insectivorous

The nest is an open and voluminous cup. It is built by the female with pine needles, ferns, plant fibers and rootlets, usually in a steep ravine. Lays two white eggs with brown spots. The female is in charge of incubating the eggs.

It is conspicuous. It continually queues and flutters in the foliage. It rarely spreads its wings and tail like the Black-throated Fan. It follows mixed flocks in the understory and sub-canopy and is frequently seen hopping and fluttering through foliage or over trunks and along branches.

It is an isolated and phenotypically distinct species. Its closest relative is possibly Myioborus castaneocapilla.

Although its population trend is to decrease, its status is of less concern.