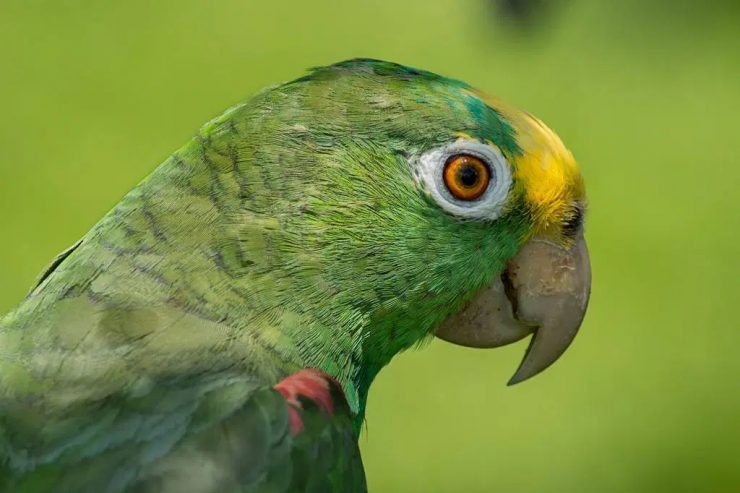 Subspecies in the nominate group (including subspecies xantholaema, nattereri and panamensis) have a total length of 33–38 cm (13–15 in). As most other amazon parrots, it has a short squarish tail and primarily green plumage. It has dark blue tips to the secondaries and primariesand a red wing speculum, carpal edge (leading edge of the wing at the «shoulder») and base of the outer tail feathers. The red and dark blue sections are often difficult to see when the bird is perched, while the red base of the outer tail feathers only infrequently can be seen under normal viewing conditions in the wild. The amount of yellow to the head varies, with the nominate, nattereri and panamensis having yellow restricted to the crown-region (occasionally with a few random feathers around the eyes), while the subspecies xantholaema has most of the head yellow. All have a white eye-ring. They have a dark bill with a large horn (gray) or reddish spot on the upper mandible, except panamensis, which has a horn-colored beak. Males and females do not differ in plumage. Except for the wing speculum, juveniles have little yellow and red to the plumage.

The members of this complex are known to hybridize in captivity and recent phylogenetic analysis of DNA did not support the split into the three «traditional» biological species, but did reveal three clades, which potentially could be split into three phylogenetic species: a Mexican and Central American species (incl. panamensis, which extends slightly into South America), a species of northern South America (northern nominate), and a species from the southern Amazon basin (nattereri, xantholaema and southern nominate). The Central American clade can potentially be split further, with panamensis and tresmariae recognized as two monotypic species. The members of the clade from the southern Amazon basin should arguably be included as subspecies of the blue-fronted amazon, as they are closer to each other than to the northern clades. Disregarding these problems, the following taxa are part of the Amazona ochrocephala complex as traditionally delimited:

Of these, hondurensis was only recently described, while the population in northwestern Honduras and adjacent eastern Guatemala (near Puerto Barrios) resembles belizensis and is commonly included in that subspecies, but may actually represent an undescribed subspecies. It has sometimes been referred to as guatemalensis, but until it is officially described, the name remains provisional. An additional subspecies, magna, has sometimes been recognized for the population on the Gulf slope of Mexico, but today most authorities consider it invalid, instead including this population in oratrix.

The yellow-crowned amazon is found in the Amazon basin and Guianas, with additional populations in northwestern South America and Panama. It has been introduced to Grand Cayman. It is a bird of tropical forests (both humid and dry), woodlands, mangroves and savannas and may also be found on cultivated land and suburban areas. In the southern part of its range, it is rarely found far from the Amazon rainforest. It is mainly a lowland bird, but has locally been recorded up to 800 m (2600 ft) along on the eastern slopes of the Andes.  Introduced–and apparently breeding–populations have been reported in Puerto Rico.

They are normally found in pairs or small flocks up to 30, but larger groups may gather at clay licks. Their food includes fruits, nuts, seeds and berries. Foods with sugar and a large amount of salt can be dangerous for them.

The nest is in a hollow in a tree, palm or termitarium, where they lay two to three eggs. The incubation time is about 26 days and the chicks leave the nest about 60 days from hatching.

The yellow-crowned amazon is considered to be of least concern by BirdLife International, and consequently, also by IUCN. Although populations are believed to be in decline, they do not yet approach the threshold specified by BirdLife International to rate the species as near threatened. As is the case with most parrots, it is listed on appendix II of CITES. It occurs in numerous protected areas and remains fairly common throughout a large part of its range.