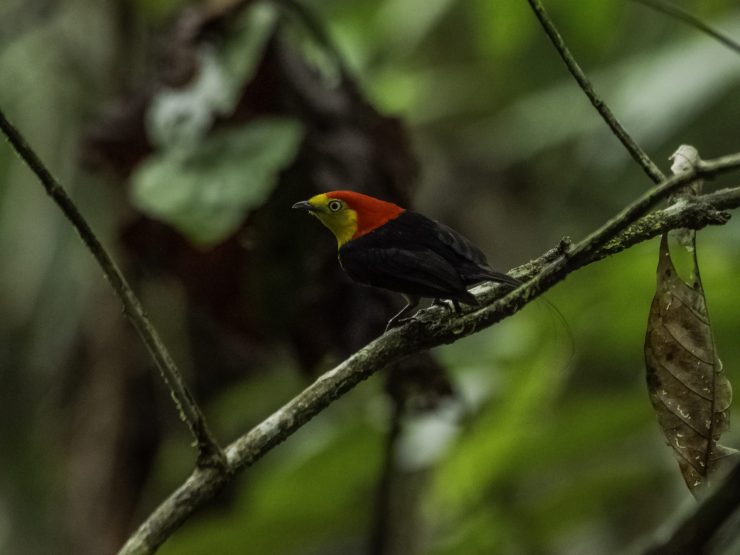 It measures 11.5 cm in length, without considering the 4 cm of the male’s tail filaments and 2.5 cm in the female.7 The bonito male has a bright red crown and nape, the rest of the back is black; the white of the internal flight feathers is seen mainly in flight; the antlers of the tail feathers are projected as unique filaments that curve upward and inward. The forehead, face and underparts are bright yellow. The female is olive green above, somewhat paler in the lower parts, the belly is pale yellow; the tail is like that of the male but shorter.

For a long time it was placed in a monotypic genus Teleonema, mainly based on highly modified tail feathers. Only in the 1970s was it shown that the genre did not hold. The most recent genetic data confirmed that it is closely related to Pipra fasciicauda and P. aureola, with whom it forms a superspecies, the three replacing one the other geographically. Pipra heterocerca is a hybrid between this and P. aureola. The subspecies subspecies apparently crosses with the nominal one on the border between Colombia and Ecuador.

The feminine generic name «Pipra» derives from the Greek «pipra, also piprō, piprōs or pipōn»: small bird mentioned by Aristotle and other authors, but never properly identified; and the name of the species «filicauda», comes from the Latin «filum, fili»: thread and «cauda»: tail; meaning «with the tail in the form of a thread.»

According to the classification of the International Ornithological Congress (IOC) and Clements Checklist v.2015, 2 subspecies are recognized, with their corresponding geographical distribution:

• Pipra filicauda subpallida (Todd, 1928) – eastern Colombia (east of the Andes) and northwestern Venezuela (eastward, on both sides of the Andes, up to Miranda).

• Pipra filicauda filicauda Spix, 1825 – southern Venezuela (south and west of Amazonas), northwest and central Brazil (east to the mouth of the Negro River, south to the headwaters of the Juruá and Middle Purus rivers), east of Ecuador and northeast of Peru (south to the middle Ucayali river).

It is found upstream in the western Amazon basin and neighboring countries, north of Peru, east of Ecuador, in Colombia, and the southern and western parts of Venezuela. In Venezuela it is distributed upstream in the Orinoco river basin, but not in the final 1,300 kilometers, and its range in Venezuela continues around the Andes mountain range to the northwest coast. In northwestern Brazil, the species is distributed from Roraima and Amazonas west to Venezuela and Colombia, and southwest from Rondonia and Acre to Peru and Ecuador.

This species is quite common in the understory of varzea jungles, and close to watercourses in mainland jungles; in Venezuela also near water in deciduous forests and in gallery. Mainly below 500 m of altitude.

It is a discreet bird that can be seen in fruit trees or where the males make their displays in small leks. Males are exhibited both alone and in association with another male, sometimes brushing the face or throat of the male or female with the filaments of the tail.

Their diet consists of small fruits and insects that they collect or capture in flight.

Its most frequent call is a prolonged, nasal and descending «iiiuu».