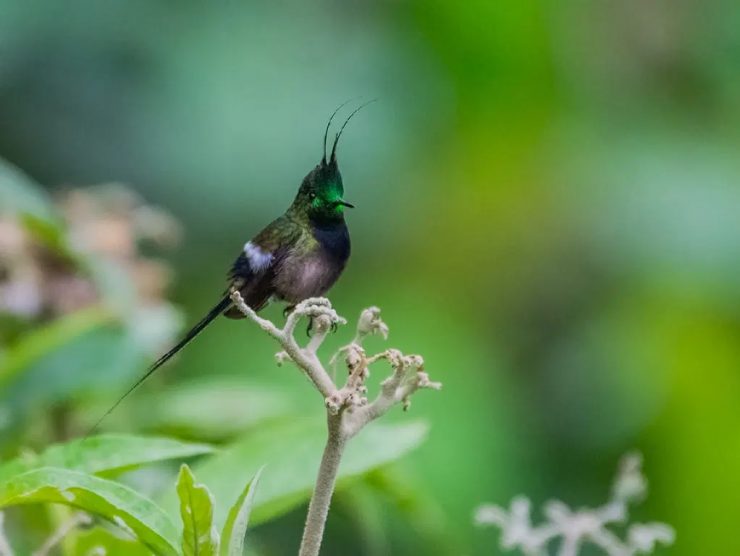 The Wire-crested Thorntail is a hummingbird of average size; although the female is similar it is of a much smaller size. It is distinguished by the long, filamentous crest of the male. It is a rare species in Colombia, much more frequent in the humid forests of Ecuador, yet little is known about its natural history.

The male is approximately 11.4cm of lenght and the female 7.5cm. It has a short 13mm beak, which is straight. The male has an iridescent green crown and ruff, a long, filamentous crest. The rest is coppery green on top with a white band at the rump. The underparts are sooty black in the center; with brownish sides with white patches on flanks; its tail is blue black; long and forked. It has 3 outer pairs of thin and pointed rectrices: the rachis of all the rectrices are white. The female is much smaller; Above it is a coppery green hue with a white band at the rump. At the bottom it is black with a white malar streak and a white patch on the flanks; Mainly with a short, blue-black tail, with a white apex.

Similar to the Black-bellied Thorntail, but it does not have a filamentous crest and has a narrow chest band in a coppery hue. Up close, the grayish (not black) outer rectrices are notable. The female is almost identical to that of Black-bellied Thorntail, but they have black central underparts, instead of black mixed with green on her breast. It is also similar to the female of the Festive Coquette

Colombia. Apparently it is an inhabitant of the eastern base of the Eastern mountain range from Cundinamarca to the south. It is known from a few towns in the extreme east of Cundinamarca (Medina from 500 to 600m) and near Villavicencio. To the east Colombia, east of Ecuador (600 to 1200m) and the northeast of Peru.

It is rare and not well known in Colombia. In Ecuador, it is found in the humid jungles and mountain edges.

In eastern Ecuador and Peru, it feeds mainly on Inga in bloom.

It has a wavy, bee-like flight when foraging on canopy flowers and emerging trees. Perches exposed on canopy edge.

It is generally grouped in the genus Discosura. Also closely related to Lophornis.

Least concern. The global population has not been quantified and is therefore considered rare.