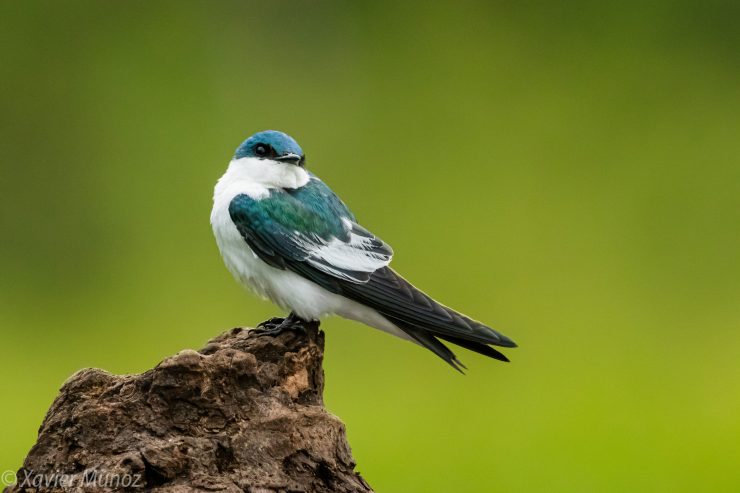 The white-winged swallow (Tachycineta albiventer) is a resident breeding swallow in tropical South America from Colombia, Venezuela, and Trinidad south to northern Argentina. It is not found west of the Andes. This swallow is largely non-migratory.

The genus Tachycineta was established for this group of swallows by German ornithologist Jean Cabanis in 1850. The genus name derives from Ancient Greek takhukinetos, «moving quickly»; the specific name albiventer is from Latin albus, «white», and venter, «belly». This swallow is monotypic, and no subspecies are currently recognized.

The adult white-winged swallow is 14 centimetres (5.5 in) long and weighs 14–17 grams (0.49–0.60 oz). It has iridescent blue-green upperparts, white underparts and rump, and white edgings to the secondary flight feathers. The wings are otherwise black, along with the tail. It has dark brown eyes and a black bill and legs. The sexes are similar, although it is noted that the females have slightly less white on the wing. Juveniles have grayer underparts and are duller in general when compared to the adults. The juvenile also has less white on the wing.

White-winged swallows can be distinguished from the similar mangrove swallow by the lack of a white line above its lores and a greater amount of white on its wings.

The white-winged swallow is native to Argentina, Bolivia, Brazil, Colombia, Ecuador, French Guiana, Guyana, Paraguay, Peru, Suriname, Trinidad and Tobago, and Venezuela. Occasional vagrants reach Panama. They are usually not found on the Pacific coast, especially in the southern portion of South America.

The species is usually found in or near lowland areas along bodies of water such as rivers or lakes, at elevations of about 500 metres (1,600 ft).

The white-winged swallow feeds primarily in flight at a low altitude, catching flying insects. It usually forages over water but may also feeds over land. In between foraging attempts, it usually perches on branches near bodies of water. Flight paths are direct and they fly with a flapping flight.

It is a rather solitary species that sometimes feeds in small groups a few meters from the ground or water through fast and direct flights. It is frequently seen together with the Pectoral Swallow (Atticora fasciata) east of the Andes.

The white-winged swallow is resident in most of its range, although it is migratory in the southernmost part of its range. In Brazil and Argentina, it is only present from approximately mid-September to mid-April. Where this population winters is not well known, but it is most likely in the Guianas, Venezuela, and Columbia.

The white-winged swallow is classified as Least Concern by the IUCN, based on its very large range, apparently stable population, and large population size.

The call is a harsh chirrup or a repeated, rising, buzz-like zweeed. The alarm call is short and harsh.