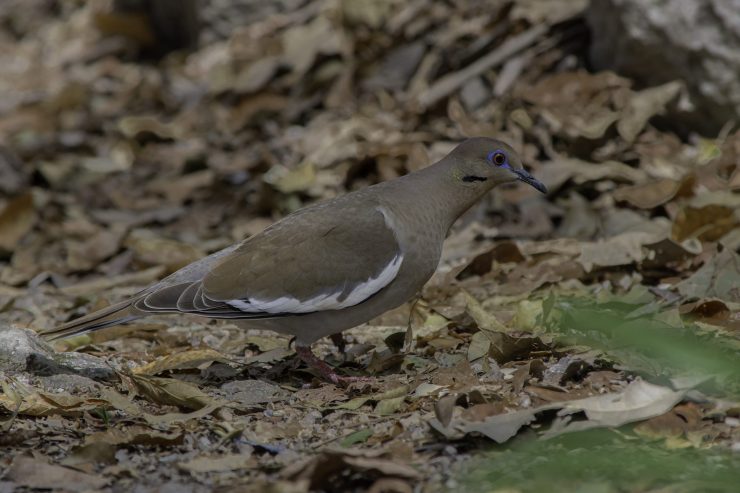 White-winged Doves are plump, square-tailed doves with relatively long, thin bills and small heads. They are brown overall, with a dark line on the cheek. A white stripe at the edge of the folded wing becomes, as the bird takes flight, a bright flash in the middle of a dark wing. The tail is tipped in white and set off with black stripes from the gray underside. Their faces are ornately marked with a black streak on the cheek, and blue skin around the red eyes.

Differentiating between sexes is difficult, and usually requires examination of the cloaca. Males do have a more iridescent purple color to the crown, neck and nape as well as a more distinctive ear spot, though the differences are slight. Males are usually heavier on average, but differences in daily weight due to feeding make this an inaccurate field tool. Thus most observers cannot accurately differentiate between sexes based on external characteristics alone.

Their molt is similar to that of the mourning dove. Molting runs June through November, and occurs in the summer breeding grounds unless interrupted by migration.

Some populations of white-winged doves are migratory, wintering in Mexico, Central America, and the Caribbean. They are year-round inhabitants in Texas. San Antonio, Texas, had a year-round population of over a million doves in 2001. The white-winged dove inhabits scrub, woodlands, desert, urban, and cultivated areas. They are found increasingly far north, now being visitors to most of the United States, and small parts of southern Canada.

In recent years with increasing urbanization and backyard feeding, it has expanded throughout Texas, into Oklahoma, Louisiana and coastal Mississippi. It has also been introduced to Florida. The white-winged dove is expanding outside its historic range into Kansas, Arkansas, Oklahoma, and northern New Mexico. It has been increasingly reported as far north as Canada and Alaska. Within Arizona, populations are effectively divided between agricultural and desert groups. It shares its habitat with that of the mourning dove, but the white winged dove will fly higher.

Look for White-winged Doves in desert habitat in the Southwest and in cities and suburbs of Texas and the coastal Southeast. They often visit backyards, especially those with birdbaths and feeders. Individuals wander widely and irregularly across the continent after the breeding season ends.

White-winged Doves forage on waste grain and seeds on the ground, or take to trees to eat berries. In the Sonoran Desert, they eat many saguaro cactus fruits. They often gather in huge flocks for trips between roosting and foraging areas, as well as during migration. Breeding and

To impress females, males circle them with tail spread and wings raised, and also fan or flap their tails, or engage in cooing and preening. Males may aggressively defend territory from other males, sparring with wing-slaps. Males and females work together in raising the young. The white-winged dove builds a flimsy stick nest in a tree of any kind and lays two cream-colored to white, unmarked eggs. One chick often hatches earlier and stronger, and so will demand the most food from the parents. A dove may nest as soon as 2–3 months after leaving the nest, making use of summer heat. The dove will nest as long as there is food and enough warmth to keep fledglings warm. In Texas, they nest well into late August. Families and nestmates often stay together for life, perching and foraging together.[citation needed]

They have better nesting success when in mesquite or tamarix trees. Breeding occurs in two peaks in the summer, although the timing of their breeding varies among years. The peak breeding times for these desert doves occur from May-June to July-August. Breeding in urban areas also occurs in two peaks but may be somewhat offset in timing compared to the desert birds. By early September, most of the adult birds have already begun the migration south. The young leave soon after.

They will return to the same nesting site year after year, sometimes rebuilding a nest in the exact location it was the year before.

Males attend to the nest for the majority of the day, except for foraging breaks during the mid-morning and late afternoon while the female watches the nest. At night, females watch the nest, the male roosts nearby.

Juvenile feathers begin to replace the natal down by seven days old. The prejuvenile molt is complete around 30 days old.

White-winged doves are granivorous, feeding on a variety of seeds, grains, and fruits. Western white-winged doves (Zenaida asiatica mearnsii) migrate into the Sonoran Desert to breed during the hottest time of the year because they feed on pollen and nectar, and later on the fruits and seeds of the saguaro cactus. They also visit feeders, eating the food dropped on the ground. Unlike mourning doves, they eat corn and wheat right off the head. This gregarious species can be an agricultural pest, descending on grain crops in large flocks.

White-winged doves have been found to practice collaborative feeding. Observations in Texas revealed that some bird were shaking seeds from a Chinese tallow tree for the benefit of those on the ground. Mourning doves may represent a vector to spread the invasive Chinese tallow tree, by defecating undigested seeds.

Agricultural fields, especially cereal grains, are a major source of forage. However, they provide less nutrition and protein content, which limit productivity. Having access to significant amounts of native seed is important to ensure that nestlings fledge and are healthier. This is made even more critical by the fact that white-winged doves do not supplement their diet with insects while raising young, unlike many other grain eating birds.

David Sibley describes the call as a hhhHEPEP pou poooo, likening it to the English phrase «who cooks for you». They also make a pep pair pooa paair pooa paair pooa call, with the last two words being repeated at length. Males will set on dedicated perches to give their call, which is referred to as a «coo». Calling is most frequent during the breeding season, and peaks in May and June. Most calls are given just before dawn, or in the late afternoon. Females give a slightly softer and more slurred call than males. The purpose of calling is uncertain, but is mainly used for courtship and to defend territory. A shortened version of their song may be used between mates to maintain pair bonds. Nestlings can make noises starting at two days old; by five days old they can whistle a sur-ee call to beg for food.

Non-vocal sounds include a wing whistle at take-off, which is similar to that of the mourning dove, albeit quieter. Their wing beats are heavy, sounding similar to other pigeons. [12] When leaving cooing perches, males make an exaggerated and noisy flapping of the wings.