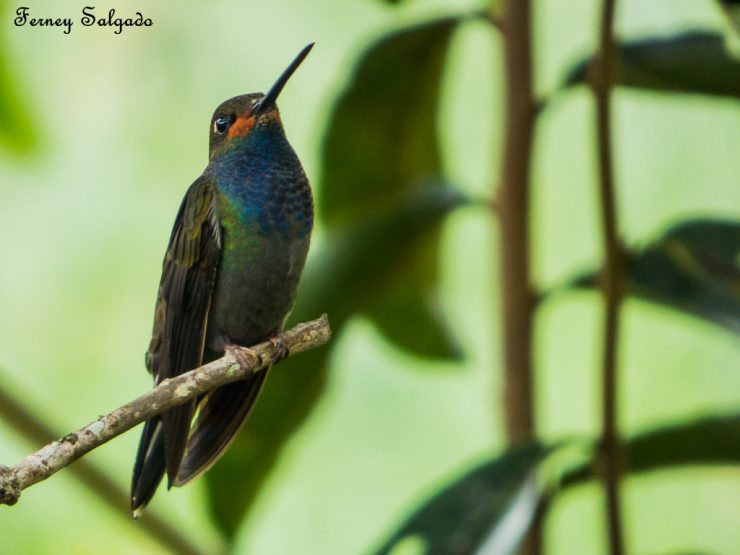 It is the only species in the genus Urochroa. Its name means colorful tail and derives from the Greek roots oura = tail and khroa = color. The epithet bougueri was established in honor of the French mathematician, astronomer and hydrographer Pierre Bouguer.

Long-billed hummingbird, subtly curved and black, with a body length of 13 to 14cm and a weight of 8.5 to 9.2g. It has a coppery green back with a rufous chin and malar area. Its throat and breast are iridescent blue, it has a brownish-gray belly, coppery uppers, black underflows, and dull green sides and flanks. Its central and external rectrices are black and the rest white with a dark gray margin.

Similar to the Rufous Hummingbird (Boissonneaua jardini), but without rufous on the inside of the wing and without the black margin on the sides of the tail. It can also be confused with the Velvet Hummingbird (Lafresnaya lafresnayi) because of the tail pattern, although this one is much smaller and has green and black underparts.

Two subspecies are recognized, U. b. bougueri that lives on the Pacific Coast of southwestern Colombia and northwestern Ecuador and U. b. leucura that lacks the rufous line in the malar area and is found on the eastern slope of the Colombian Andes in Nariño, eastern Ecuador and northeastern Peru.

Some authors suggest that the Leucura subspecies deserves recognition as a distinct species. Some authors also suggest that the species of the genera Urochroa, Boissonneaua and Aglaeactis form a monophyletic group based on similarities in plumage coloration and vocalizations.

It is found between 1,500 and 2,800 meters above sea level, along the Pacific slope from the headwaters of the San Juan River on Cerro Tatamá in Colombia to the northeast of Peru, passing through the northwestern and eastern Ecuador.

It is a very common inhabitant in humid and very humid forests, in edges along rivers and streams. It also uses forests in secondary succession and areas with a predominance of shrub vegetation. It most frequently forages in the middle and lower strata of the forest, but it can also be observed in the canopy.

It has been recorded in the reproductive period between December and March in southwestern Colombia, but in the Ñambí river region it has two reproduction peaks in the year, one in April-June and the other in November-December. Build a cup-shaped nest with mosses, lichens, and small roots on vertical branches of large trees, usually 5-12 m above ground level. The clutch size is two eggs that the female incubates for 16-18 days and the chicks last 23-25 ​​days in the nest.

It is a sedentary and territorial hummingbird that moves elevationally at certain times of the year. Males defend foraging territories, but eventually forage alongside other hummingbirds on flowering trees. It is common to observe it on rivers capturing insects while performing acrobatic movements. It frequently feeds on nectar by holding firmly to the flowers with its legs and captures insects in flight or on the surface of branches.

In the international arena it is considered a kind of minor concern.