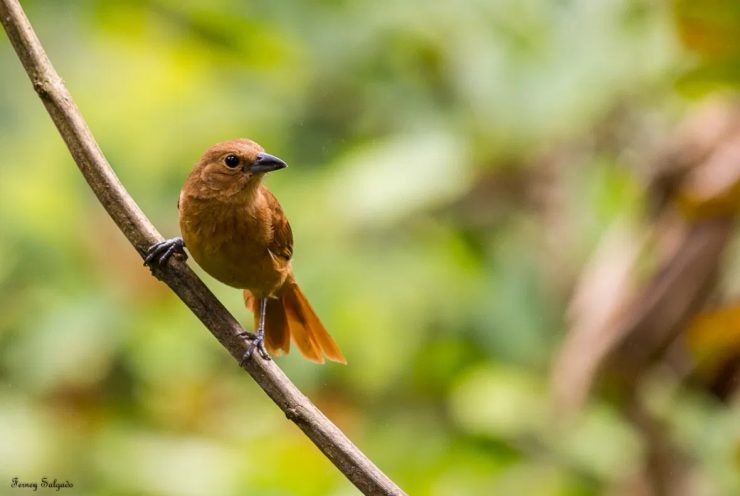 It is about 14 cm long and weighs about 14 g. It has a long tail and a pointed beak. Adult males are shiny black minus the edge of the shoulders and below the wings. The white spot on the shoulders is the main difference with the very similar black tanager (Tachyphonus rufus), in which it is smaller and practically only visible in flight. In contrast, females and immatures have olive-green upper parts and yellowish underparts with gray head and neck.

The generic masculine name «Loriotus» derives from the French word «loriot», which is the common name of the European oriole Oriolus oriolus; and the name of the species «luctuosus», from Latin: mourning, in reference to the black color of the species

It is distributed over an extensive area, from Honduras, through Nicaragua, Costa Rica, Panama, and west of the Andes through northern Colombia, northwest Venezuela and western Ecuador; and, east of the Andes from western Venezuela, through Colombia, eastern Ecuador, eastern Peru, to central Bolivia, eastward through eastern Venezuela, Trinidad and Tobago, Guyana, Suriname, French Guiana and most of the Brazilian Amazon. It is absent from the northwestern quadrant of the Amazon basin.

This species, widely disseminated, is common but of localized occurrence in its natural habitats: the canopy, the sub-canopy and the edges of humid jungles and forests, mainly below 800m of altitude.

The species L. luctuosus was first described by the French naturalists Alcide d’Orbigny and Frédéric de Lafresnaye in 1837 under the scientific name Tachyphonus luctuosus; its type locality is «Guarayos, Bolivia».

In 2010, publications of complete phylogenies of large sets of species of the Thraupidae family based on genetic sampling, [10] [11] allowed us to verify what was previously suggested by other authors: that the genus Tachyphonus was polyphyletic, with the species formerly called Tachyphonus luctuosus, T. rufiventer and T. cristatus forming a well characterized clade distant from the rest of the species. Burns et al. (2016) proposed to separate the three cited species into a new genus Islerothraupis. [7] The inclusion of the three species and the genus Islerothraupis were recognized in Proposal No. 730.05 to the South American Classification Committee (SACC).

Subsequently, it was discovered that there was an available genus Loriotus, described by the Polish zoologist Feliks Paweł Jarocki in 1821, whose type species was Tanagra cristata = Tachyphonus cristatus, thus Islerothraupis became a later synonym of it. This taxonomic correction was approved in Proposal N ° 836 to the SACC

Genetic data indicate that the present species is sister to the pair formed by Loriotus rufiventer and L. cristatus

The Brazilian Committee of Ornithological Records (CBRO) in its 2014 Edition of the List of Birds of Brazil groups this species in the genus Lanio, under the scientific name Lanio luctuosus

According to the classifications of the International Ornithological Congress (IOC) [14] and Clements Checklist / eBird v.2019 [15], five subspecies are recognized, with their corresponding geographic distribution