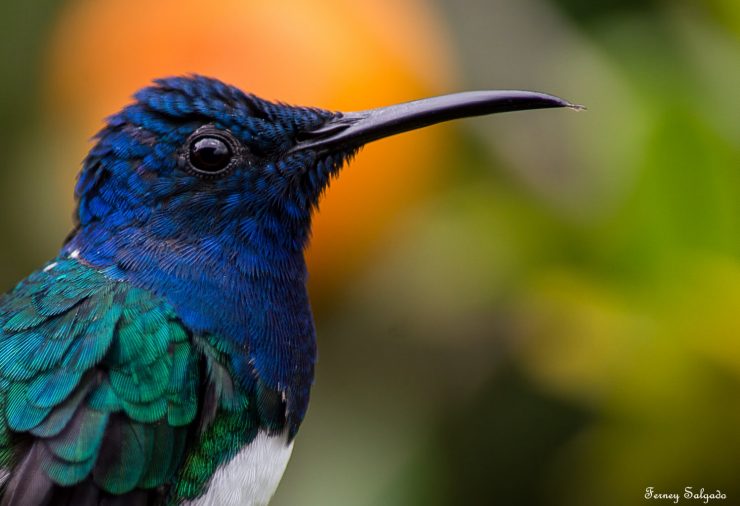 The white-necked jacobin (Florisuga mellivora) is a species of apodiform bird in the Trochilidae family.  It’s a large and attractive hummingbird that ranges from Mexico, south to Peru, Bolivia and south Brazil. It is also found on Tobago (sub-species F. m. flabellifera) and in Trinidad (sub-species F. m. mellivora)

Large hummingbird approximately 10.2cm long, with a short bill (20mm), thick at the base and subtly curved at the tip. This species has a well accentuated sexual dimorphism. The male is easily recognized by his lustrous blue head, throat and chest, which together form a hood bounded dorsally by a white crescent on the nape. The rest of the back and high chest are bright green. The belly and tail are white, the latter with a black tip. On the other hand, the female has a bronze green back, a dark green throat and breast with white scales, a white belly and a dark green tail with a dark subterminal band and white apex.

Females in opaque plumage can be confused with the Scaled-breasted Hummingbird (Phaeocroa cuvierii), although in the latter the scaling is not so pronounced.

It is a typical lowland species that generally reaches up to 1600m above sea level. Its geographic distribution is wide, and it is found from southern Mexico, through Central America, Ecuador, Venezuela, Las Guyanas, Peru to Bolivia and Brazil. In Colombia it is found in the Pacific and Caribbean regions, inter-Andean valleys, eastern plains and the Amazon.

It is a common inhabitant of the edges of humid and very humid forest where it prefers the highest layers of vegetation. It also inhabits forests in secondary growth and in coffee and cocoa crops.

It feeds on nectar, taking advantage of a wide variety of floral resources, including epiphytic herb flowers (Norantea, Columnea), Heliconias, shrubs (Hamelia patens) and trees of the Inga, Vochysia, Erytrhina, Bauhinia and Symphonia genera. It also includes a significant portion of insects in its diet such as Diptera and Hymenoptera that it catches on the fly.

Their reproductive events coincide with the end of the dry season and the beginning of the rainy season. In the western Andes there are records of reproductive events in the month of November, in the northeast of the country in the month of June, and in Costa Rica and Panama between January and June. This species builds a cup-shaped nest with plant fibers and cobwebs, which it has under wide leaves on the fringes of streams. The size of the clutch is two eggs that the female incubates.

It is characterized by being a solitary, aggressive and territorial species that defends aggregate resources in space. However, on some occasions it can be observed in groups with other species of hummingbirds visiting trees in full bloom. It is an effective pollinator of Hamelia patens in Panama. Forages at variable heights, although it prefers the upper layer of vegetation. When it flies, it spreads its tail like a fan and often flutters in search of flying insects. You can also hunt by making short flights from a perch in the treetops, over canyons and rivers. Their song is a tsiit with distinctive screeches. Males perform reproductive displays by rapidly ascending and descending while fanning out their tails.