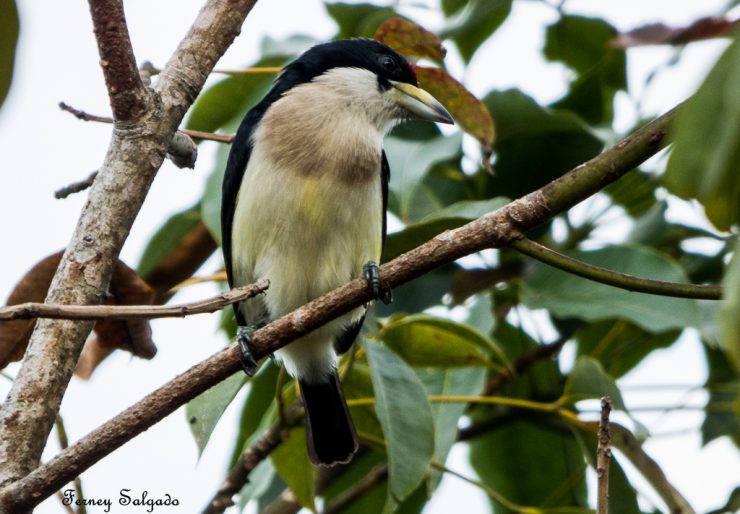 This species is endemic to Colombia and is currently threatened. Its name means big head with a white belly. Capito derives from Latin and means big head and hypoleucus comes from the Greek hupo = under and leukos = white.

This bird measures between 18 and 19cm. It has a strong and robust pale yellow bill with a white malar region. The male has a red forehead and crown, bluish black sides of the head, as well as the upper parts which also have a white «V» -shaped spot. His neck and throat are also white and he has a pale brown spot on his chest. The rest of the underparts are yellowish white. Both sexes are similar but the female has a black spot on the tip of the bill. The immature ones lack a brown band on the chest.

It is distinguished from the Spot-crowned Barbet (Capito maculicoronatus) because it has a pale bill, a red forehead, a white nape and mantle, and non-striated flanks. The White-mantled Barbet is mainly from the western Andes of Colombia.

It is only found in the Colombian territory; it is an ENDEMIC species. It commonly lives between 200 and 1500 m above sea level, although it has been reported between 180 and 2100 m. It is located in the middle valley of the Magdalena River, the northern part and the eastern slope of the Central mountain range and the lower Cauca-Nechí region. There are historical records in the departments of Bolivar, Antioquia, Caldas, Tolima and Cundinamarca.

It inhabits humid low montane forests and secondary forests. It has also been recorded in coffee and cocoa plantations. It most frequently uses vegetation with structural characteristics of primary forest.

Their breeding season is probably between the months of April and October. In this interval of months, individuals attending nests and some pairs starting the construction of others have been registered. This species makes its nests in hollows of dead or old trees. Probably presents a social structure with a system of nursery helpers.

Forages in pairs or family groups that move through short flights constantly vocalizing. They also congregate on fruit trees, usually in the canopy. They are sometimes seen searching for insects among leaf clusters or mistletoes while joining mixed flocks. They appear to gather in groups of up to eight or more individuals in roosts in tree cavities. It establishes territories where a family group remains, in these territories it includes primary and secondary forest and forest edges.

It appears to be the most distant species in the genus taxonomically. It is probably more related to C. wallacei, C. dayi, and C. brunneipectus. The differences between the races are subtle.

It is an endangered species. The main threat it faces is the loss of its habitat due to deforestation, mainly in the Magdalena Valley. Mining exploitation and the introduction of illicit crops are the causes of the loss of vegetation cover associated with the decrease in the populations of this species. Among the recommendations to improve the conservation of this species is the creation and expansion of reserves in the upper part of the Serranía de las Quinchas and in other areas that host populations of the species.