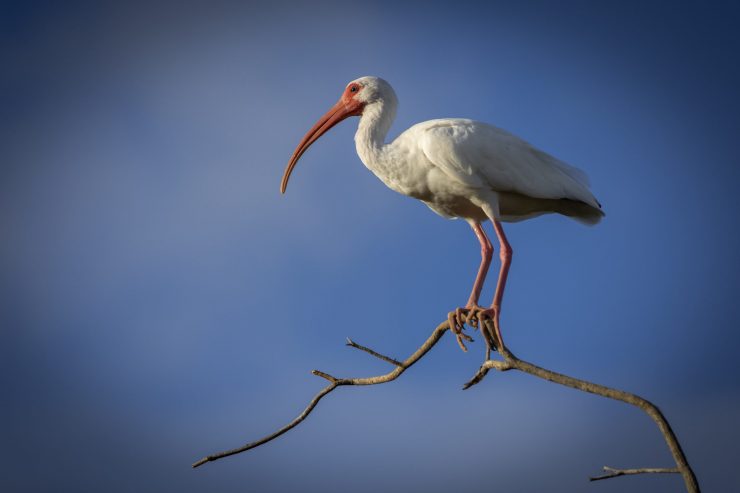 White Ibises occur in many types of wetlands including swamps, mangroves, flooded pastures, freshwater marshes, and shallow ponds. They forage most often in wet areas with less than 8 inches of water and sparse, short vegetation, but they also forage on lawns and in parks, especially in southern Florida where they are now accustomed to humans. They nest in colonies in trees and shrubs near fresh, brackish, or salt water. During the nesting season, they forage more frequently in freshwater wetlands because nestlings cannot safely consume large amounts of salt. During the nonbreeding season, they use coastal wetlands more frequently.

White Ibises probe for insects and crustaceans beneath the surface of wetlands. They insert their bill into soft muddy bottoms and feel for prey. When they feel something, they pinch it like a tweezer, pulling out crayfish, earthworms, marine worms, and crabs. They also stab or pinch fish, frogs, lizards, snails, and newts. Many of their prey are swallowed on the spot, but for really muddy items they carry them away to wash the mud off before eating. They break harder crustaceans with their bills and remove claws from crabs and crayfish before eating them.

Females choose where to build the nest within the colony. They typically build nests in forks of live or dead trees such as black elderberry, red bay, black mangrove, willow, and cypress. If taller nest sites are unavailable, they often nest in clumps of grasses or sedges. Nest height ranges from 0.5–12 feet above the ground. The location of breeding colonies often changes from year-to-year.

The male gathers sticks for the nest either from the ground, a nearby nest, or a dead tree. He gathers most of the nest material, but the female does gather some sticks on her own. He gives the sticks to the female, which she arranges into a messy platform about 10 inches wide and 2–4 inches tall. Occasionally the male helps place the sticks into the nest or they do it together. It takes about 7 days to build a nest, and they continue to maintain the nest throughout the nesting cycle.