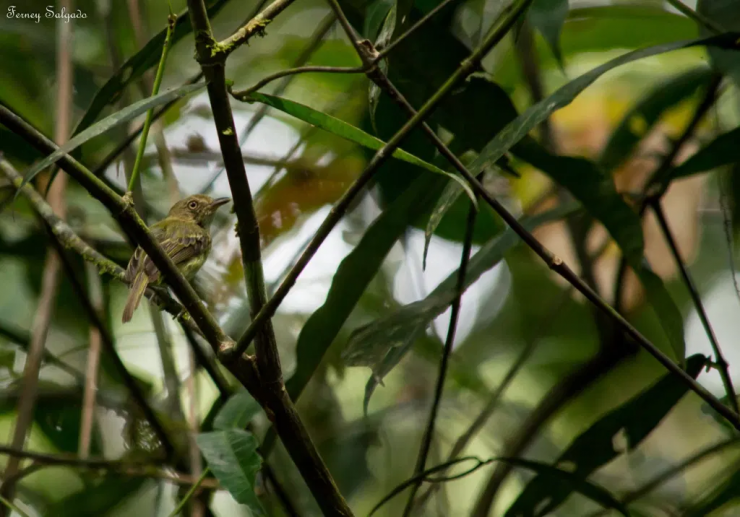 The white-eyed marmoset is 11.2 cm of lenght. Its upper parts are olive-brown in color, with the forehead and sides of the head more greyish. Its throat is grayish and its strong, pointed beak is black. It has fine white eye rings that give it its name. Its wings are blackish striped in light yellow. Their underparts and the underside of their remiges are light yellowish, with an olive green dotted chest and flanks.

This species is considered uncommon in its natural habitat, the middle and lower strata of the humid tropical forests, up to 1000 meters of altitude.

The species H. zosterops was first described by the Austrian ornithologist August von Pelzeln in 1868 under the scientific name Euscarthmus zosterops; the type locality is: «Marabitanas, Río Negro, Brazil».

Formerly classified in the genus Euscarthmornis and more recently in Idioptilon, both now obsolete. It was long considered conspecific with Hemitriccus griseipectus, but the two exhibit notable differences in plumage and voice. The eastern Amazon populations are vocally distinct from those west of the Branco and Negro rivers, suggesting that there may be two species involved; Birds of French Guiana were described as the subspecies rothschildi (currently synonymous with the nominal) and such a name would be available for the eastern form, if proven to be a separate species. The limits between the nominal subspecies and flaviviridis are uncertain, and their union has been proposed by some authors.

According to the classifications of the International Ornithological Congress (IOC) and Clements Checlist v. 2018, two subspecies are recognized, with their corresponding geographical distribution:

This is a dull little tyranid from the high dense forests. Inconspicuous bird that perches solitary or in pairs in the middle layer of the canopy, easy to be ignored until the song of the male is recognized.