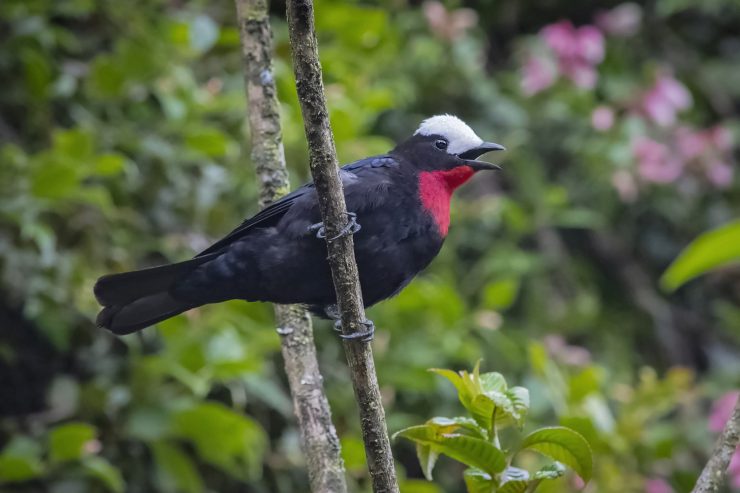 The size of the bird is 23 to 24 cm and weighs between 95 and 125 g. It is a large, spectacular and unmistakable species; It has a small beak in relation to body size. The male has a glossy and velvety bluish-black plumage, has a snow-white crown (1) and flanges (2), throat and chest are crimson, wings and tail are blackish blue. The female is similar to the male, but has a darker plum-colored throat and breast. The immature (3) has a white crown, but it does not have a crimson throat and the rest of the plumage is matte black. (Hilty & Brown, 1986, 2001; Hilty & Sharpe, 2016). 1) The crown is the top area of ​​the bird’s head. 2) The bridle is the area between the eyes and the nostrils of birds. 3) When the species needs several molts (such as raptors or petrels) to acquire adult plumage, all specimens that show an intermediate plumage phase (juvenile feathers and adult feathers) are called immature.

It is found from the Northwest of Venezuela through the Andes to Peru; in Colombia it is found in the Central Cordillera towards Caldas and Tolima up to Cauca, on both slopes of the Magdalena valley towards Huila, on the eastern slope of the Eastern Cordillera in Norte de Santander and from Meta to Putumayo and Nariño. It is between 1,600 and 3,200 m high.

It feeds in groups that can range from 4-8 to 20 individuals, usually with only one male per possibly family group. It does not join mixed flocks, although it can occasionally be associated with crows (Corvidae) and mountain chieftains (Cacicus sp.)

Based on an Amazonian deforestation model (Soares-Filho et al. 2006, Bird et al. 2011), it is thought that the population over three generations (approximately 11 years) loses between 35.1 and 35.8 % of suitable habitat within its range; the population is then expected to decrease by more than 30% over this period of time.

Make a very loud and repetitive «piiiaap», sometimes you can continue with 1 or 2 sharp and squeaky notes «quiip»