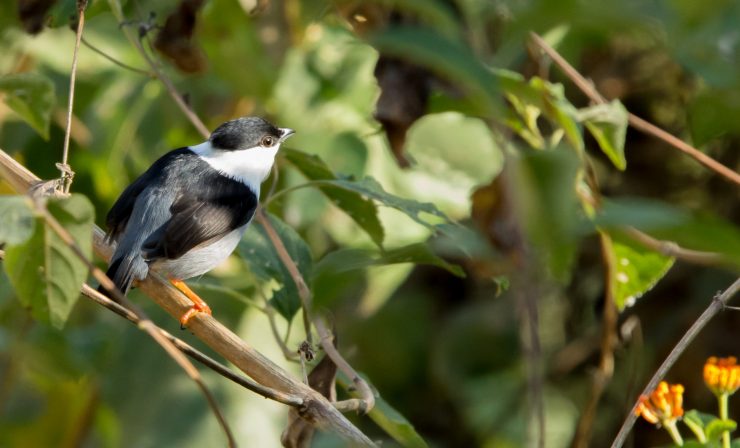 The White-bearded Manakin is a small passerine bird which breeds in tropical South America. It is a small, plump bird about 10.7 centimeters.

It is found from Guayanas, Colombia, Venezuela, eastern Ecuador, northern Bolivia, northeast Argentina, Paraguay and southern Brasil. In Colombia it is up to 1900 m above sea level (generally less than 1000m). It is located in the north of Colombia from the mouth of the Sinú River to the east to the Guajira, to the south to the lower valley of the Cauca River, the middle valley of the Magdalena River, the Serranía of Perijá and the north of the Cordillera Oriental to the altitude of the municipality of Barbosa in the department of Santander. Also to the east of the Andes and in the southwest of the department of Cauca and west of Nariño.

Like others manakins, the White-bearded manakin is a compact, brightly coloured forest bird,

The adult male has a black crown, upper back, wings and tail, and the plumage is otherwise white. He has orange legs, the female and young males are olive-green.

One the manakin loudest and best known leks markers.

The male white-bearded manakin has a fascinating breeding display at a communal lek. Each male clears a patch of forest floor to bare earth, and perches on a bare stick. The display consists of rapid leaps between sticks and the ground, accompanied by a loud wing snap, the whirring of the wings, and a chee-poo call. Groups of up to 70 birds may perform together, the largest leks being in Trinidad. The female builds a shallow cup nest low in a tree; two brown-mottled white eggs are laid, and incubated entirely by the female for about 18–19 days, with a further 13–15 days to fledging. The young are fed mainly on regurgitated fruit with some insects.

This bird has a very wide range, is fairly common and is presumed to have a large total population. The population trend is thought to be stable and the International Union conservation of nature has rated the bird’s conservation status as being of least concern.