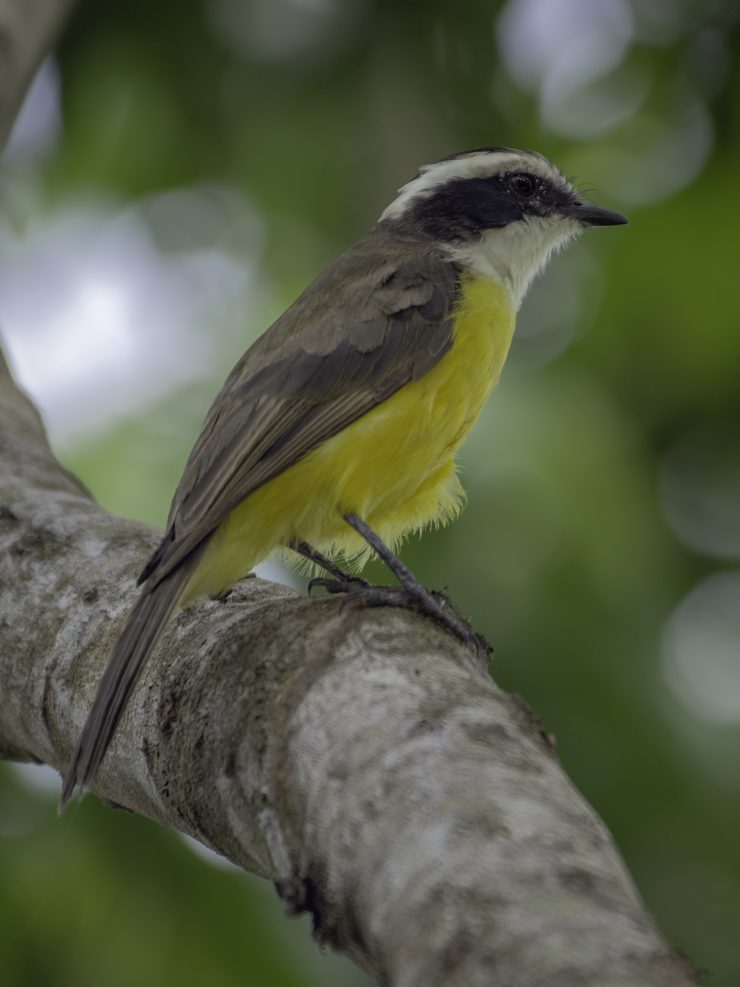 Measures 6.5 inches in length. The beak is short and black. Above it is olive brown with a black crown and face, and a long white superciliary strip; the wings are uniform, without rufous edges. The throat is white and the rest of the underparts are bright yellow.

In Venezuela it is a well-known species in the llanos region. Its possible presence in Colombia was noticed since the 1980s, records indicate that the species has a wide distribution in the department of Arauca, and occasionally it can be found in the neighboring departments of Casanare and Vichada. It is distributed throughout the north and center of Venezuela, from Carabobo, Miranda and Cojedes towards the east to the northeast of the Anzoátegui State and Delta Amacuro, and towards the south to Apure and north of Bolívar.

Its natural habitat includes tropical and subtropical humid forests as well as previously degraded forests. [1] It is observed in pairs or as solitary individuals in gallery forests, forests on the edges of savannas with scattered trees, and arboreal vegetation allied with streams and estuaries. [14] Up to 450 m altitude. [15]

The species P. inornata was described for the first time by the American ornithologist George Newbold Lawrence in 1869 under the scientific name Myiozetetes inornatus; type locality «Valencia, Carabobo, Venezuela».

The genus Phelpsia was described by the American ornithologist Wesley Edwin Lanyon in 1984.

The affinities are uncertain. It has already been placed in the genera Myiozetetes and Conopias, but it differs significantly in the morphology of the syrinx and in the architecture of the nest. [5]

The extensive genetic-molecular studies carried out by Tello et al. (2009) discovered a number of novel relationships within the Tyrannidae family that are not yet reflected in most classifications. [17] Following these studies, Ohlson et al. (2013) proposed dividing Tyrannidae into five families. According to the proposed arrangement, Phelpsia remains in Tyrannidae, in a Tyranninae Vigors subfamily, 1825, temporarily in a Tyrannini Vigors tribe, 1825, together with Tyrannopsis, Machetornis, Conopias (provisionally), Megarynchus, Myiodynastes, Myiozetetes, Pitangus) (including Philohydorus) (including Philohydoris) Empidonomus, Griseotyrannus, and Tyrannus. [18]

In the international field It is considered in minor concern