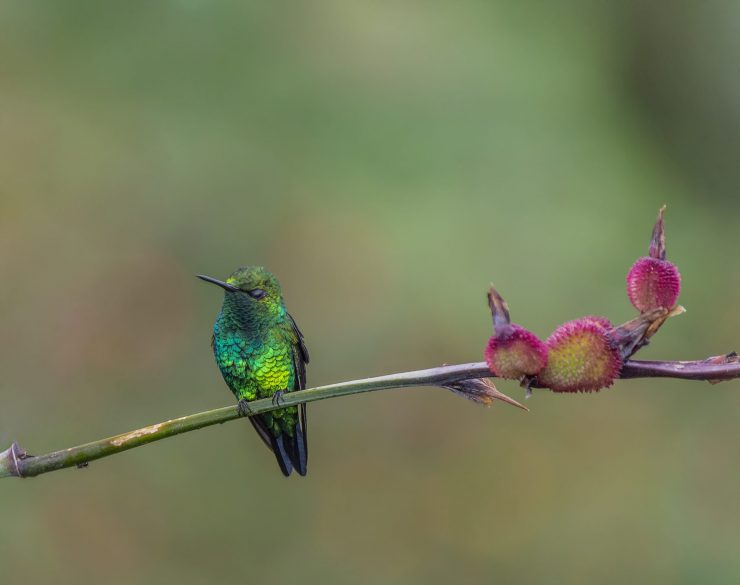 The Western Emerald (Chlorostilbon melanorhynchus) is a species of hummingbird in the family Trochilidae. Alternatively, it has been considered as a subspecies of either the blue-tailed emerald, C. mellisugus, or the red-billed emerald, C. gibsoni. It is found in Colombia and Ecuador.

Small, short-beaked hummingbird. Its colors range from green in different intensities ranging from iridescent, copper and quite bright emerald. Compared to others of its size, it has a much longer and forked tail. It is lonely. It feeds on flowers and insects. It is migratory and almost or near endemic to Colombia. This is a small hummingbird of 2.57gr. It has a total length of approximately 141.19 mm, of which 16.15mm belongs to its beak, which is very short and black. Males have an iridescent green forehead and crown, and the rest of the dorsal parts are coppery green. The tail is forked, longer than in other Chlorostilbon, waxed blue. Ventrally it is bright emerald green, with the brightest chest, and unlike other species, with little or no blue. Females have a copper green forehead and crown, and the rest of the dorsal parts are metallic green. The tail is slightly forked mainly bluish black, with the tips of the outer wheelhouses with slight traces of dark gray and green on the central wheelhouses. Below is pale gray and features a facial pattern consisting of a blackish band on the ear coverts bordered above with a grayish-white postocular dot. Juveniles resemble adult females.

It prefers young secondary growth, especially forest edges, although it is also possible to observe it in pre-montane humid and very humid forest areas but always near secondary growth patches, clearings or forest edges. It is mainly found in the undergrowth although occasionally it can also be found in the middle strata and sub-canopy. In other locations, it prefers dry habitats, cultivated areas, and gardens. It easily adapts to man-made habitats.

It is rather solitary, it prefers the undergrowth where it is observed posing at different heights or feeding at low heights on flowers such as Canna and Hibiscus. Sometimes it is possible to observe it in the upper layers of the forest, foraging in a group together with other species, generally in relatively large trees and with a large number of flowers such as those of Inga or orange trees (Citrus). They generally cannot compete with larger hummingbirds and are displaced by them, so they decide to follow foraging routes where they are less likely to have aggressive encounters with other individuals. It often pierces flower petals or uses existing piercings to «steal» nectar without the need to transport its pollen. Its flight, unlike that of the other small species, is not like that of a bee, but straight and very fast.