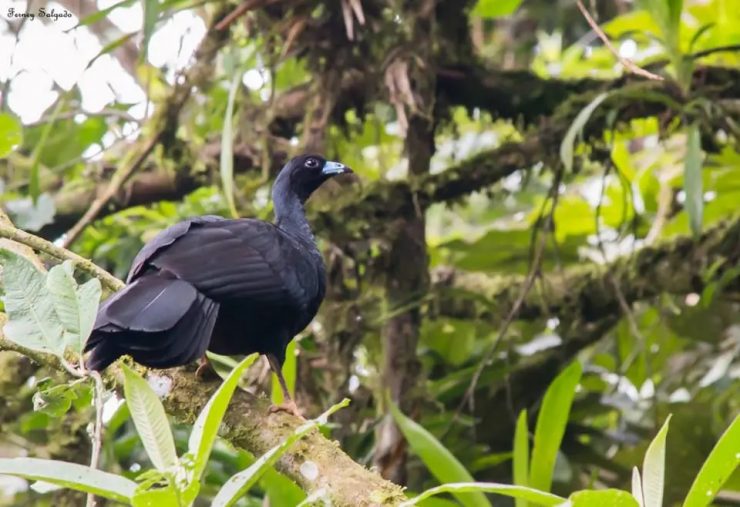 The wattled guan (Aburria aburri) is a species of bird in the family Cracidae. It is a fairly large black cracid with blue-based, black-tipped beak and a long, red-and-yellow wattle.

It is found in Colombia, Ecuador, Peru, and Venezuela. Its natural habitats are subtropical or tropical moist lowland forest and subtropical or tropical moist montane forest. The wattled guan is a fairly shy species that is mostly seen when it perches on the outer edge of the canopy from a distance. Like many tropical forest birds, it is heard more often than seen. It is threatened by habitat destruction and the IUCN has assessed its conservation status as being «near threatened».

The wattled guan is recognisable by the elongated red and yellow fleshy wattle that dangles from its throat. It is a large bird with a long tail, about 75 centimetres (30 in) long and weighing between 1,200 and 1,550 grams (42 and 55 oz). The plumage is black, the beak is blue and the feet are flesh-coloured.

The wattled guan is endemic to the foothills of the Andes in South America. Its range extends from northwestern Venezuela through Colombia, Ecuador and Bolivia to southern Peru. It used to be found on the western slopes of the Andes but this is believed no longer to be the case. On the eastern slopes it is rare in Venezuela but slightly more common in Colombia. Its natural habitat is wet mountain forest and woodland verges, and it also occurs in secondary forest. Its altitudinal range is 500 to 2,500 metres (1,600 to 8,200 ft).

Its diet is based on fruits but it also includes a smaller portion of leaves. Among the fruits on which it feeds have been recorded those of the species Ocotea oblonga, Aniba muca (Lauraceae), Dendropanax macrophyllum (Araliaceae), Cecropia telealba (Urticaceae), Geissanthus francote (Myrsinaceae), Guettarda crispiflora (Rubiaceae) and Symplocos quinduensis (Symplocaceae). The leaf consumption records correspond to those of the Fraxinus chinensis (Oleaceae) species.

In Colombia, adults with chicks have been registered on March in the Cueva de los Guácharos National Natural Park and according to the evidence of song it is inferred that their reproduction period covers the months from January to June. In Peru its breeding season covers the months from September to March. There is no more information about it.

It remains in pairs or in groups of up to eight individuals in the middle levels of the vegetation and in the canopy, although in fruit trees it can use other strata. During the playback period it is easily found because it becomes quite noisy. It is possible that it makes altitudinal migrations, although how they occur is unknown.

Genetic data indicate that the species of the genera Aburria and Pipile are sister taxa. Recent genetic data also indicate that Aburria bores is embedded in Pipile, which is why some authors suggest the inclusion of Pipile within the genus Aburria.

At the national and international level it is classified as a Near Threatened species. The main threat faced by this species is the loss of habitat due to the strong deforestation processes that occur in the Andean region as a result of the transformation of natural areas into areas for agriculture. Additionally, this guan has very low population densities throughout its geographic distribution area and it has been found that its habits and its tendency to remain on high perches make it vulnerable to hunting. It is necessary to develop studies that allow to know the population status of this species, its habitat requirements, temporal movements and the impact that the fragmentation of its habitat has on its populations.