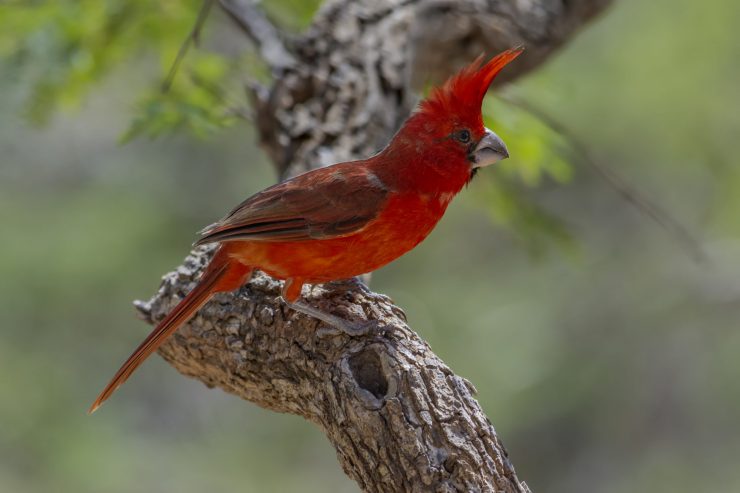 The Vermilion Cardinal s a species in the cardinal family Cardinalidae and the order Passeriformes.

It is measures about 19 cm.

This is a kind of specie restricted distribution in northern Colombia and Venezuela. It usually stays in couple and can be difficult to see.

In Colombia it’s found below 300 m above sea level on the Guajira peninsula.

The male has bright red crown with long and prominent crest. His face and ear coverings are bright red with a black band and narrow around the base of the bill, usually wider on the chin. Its high parts are more opaque red becoming brighter in the rump.

The female has a bluish white bill with the tip of the upper jaw of black color. Its head is grey with a long, sharp, bright red crest; brownish sides of the head with whitish areas on the sides of the forehead and below the cheeks, sometimes also around the eye.

The lores is dark turning blackish around the lower jaw.

Its upper parts are greyish brown which becomes more brown in the rump; it has greyish brown remiges with pink tint towards the base of the primary and in the internal margins of the secondary and tertiary ones and its rectrices are pale reddish brown. Below is brown. The young are similar to the female but more brown.

Is an unmistakable species thanks to the combination of robust bill and striking crest.

It lives in arid and semi-arid scrub with good cover of cactus and thorny shrubs.

It feeds on invertebrates, fruits and seeds.

It is a difficult to see arisca bird that remains in the lower part of the vegetation where it generally makes calls while foraging.