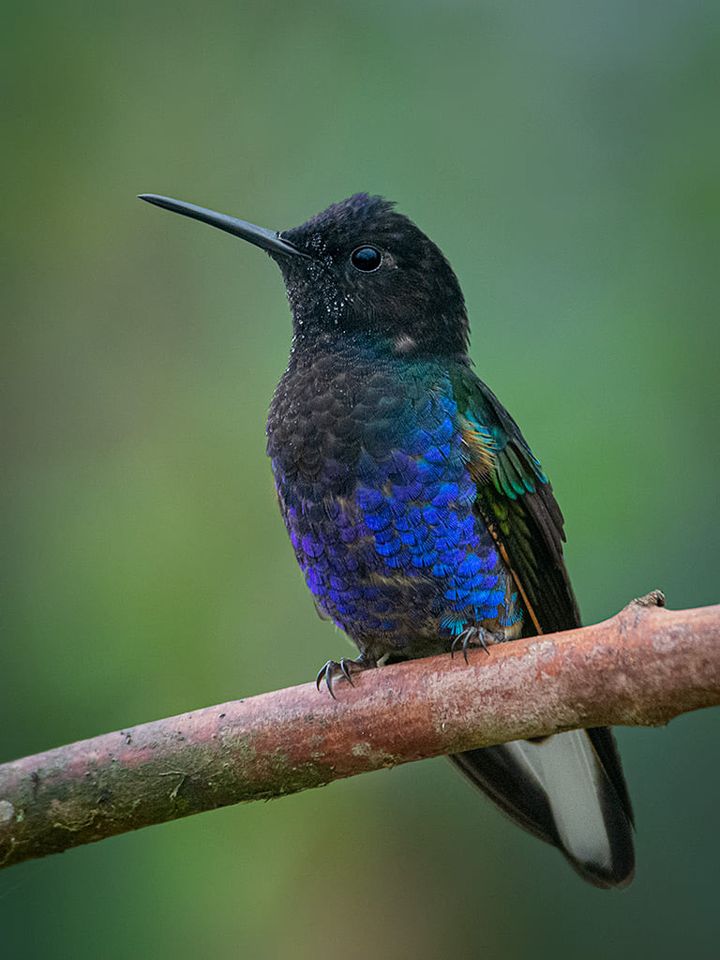 The velvet-purple coronet (Boissonneaua jardini) is a species of hummingbird in the Trochilidae family.

Measures 10.9 cm in length. It weighs 8 to 8.5 g. The beak is straight and 18mm long. Iridescent blue-green back; head, throat and upper chest black; purple hues on throat and rest of chest and belly blue to iridescent purple; inner wing coverts tan to orange; central tail feathers black, outer white with black tips. The female is duller, with the margins of the feathers of the breast and the belly of color buff.

In poorly lit condition, the plumage may appear all black, except for thecontrasting white outer flight feathers.

It is found in on the West Andean slope in western Colombia and north-western Ecuador.

It lives in the humid forest, edges of the forest and in clearings with bushes on slopes or gentle slopes, between 350 and 2,200 m of altitude.

The Velvet-purple Coronetsprimarily feed on nectar taken from a variety of brightly colored, scented small flowers of trees, herbs, shrubs and epiphytes. They favor flowers with the highest sugar content (often red-colored and tubular-shaped) and seek out, and aggressively protect, those areas containing flowers with high energy nectar.They use their long, extendible, straw-like tongues to retrieve the nectar while hovering with their tails cocked upward as they are licking at the nectar up to 13 times per second. Sometimes they may be seen hanging on the flower while feeding.

For courtship, the male circles the strand, flaps, sings, and buzzes back and forth, fanning the tail. Build a cup-shaped nest, using mosses and lichens, on a horizontal branch or a thin fork. 4 The female lays two eggs.

Hummingbirds are solitary in all aspects of life other than breeding; and the male’s only involvement in the reproductive process is the actual mating with the female. They neither live nor migrate in flocks; and there is no pair bond for this species. Males court females by flying in a u-shaped pattern in front of them. He will separate from the female immediately after copulation. One male may mate with several females. In all likelihood, the female will also mate with several males. The males do not participate in choosing the nest location, building the nest or raising the chicks.

The female Velvet-purple Coronet is responsible for building the cup-shaped nest out of plant fibers woven together and green moss on the outside for camouflage in a protected location in a shrub, bush or tree. She lines the nest with soft plant fibers, animal hair and feather down, and strengthens the structure with spider webbing and other sticky material, giving it an elastic quality to allow it to stretch to double its size as the chicks grow and need more room. The nest is typically found on a low, thin horizontal branch.

The average clutch consists of two white eggs, which she incubates alone, while the male defends his territory and the flowers he feeds on. The young are born blind, immobile and without any down.

As is the case with other hummingbird species, the chicks are brooded only the first week or two, and left alone even on cooler nights after about 12 days – probably due to the small nest size. The chicks leave the nest when they are about 7 – 10 days old.