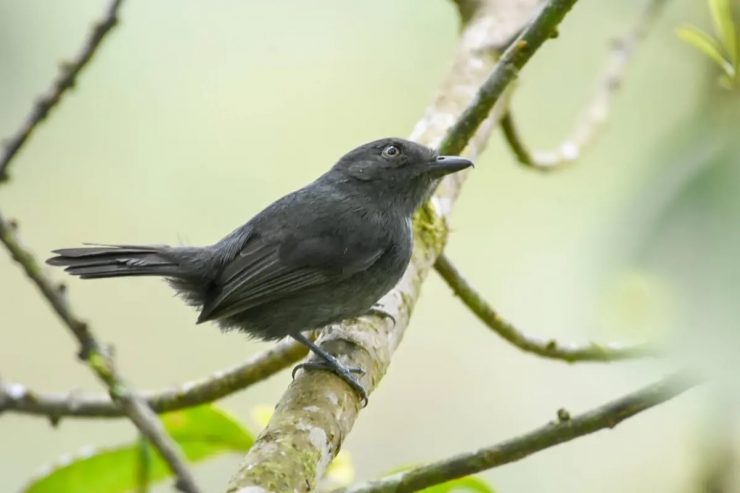 The Batara Unicolor is found in humid and very humid jungles of the three mountain ranges of Colombia. It deliberately moves in pairs from undergrowth to sub-canopy and climbs vines like other Batara. Thamnophilus derives from the Greek thamnos = bush and philos = lover of, referring to their habit of moving at low heights among the bushes. Its unicolor epithet derives from Latin and means one color.

It measures between 14 and 16 cm and weighs 20 to 24 g. Male is uniform black sometimes with white spots on outer rectrices. Female is dull dark refescent brown above, brighter on crown. The forehead, sides of the head and high throat are gray; the underparts are okra brown.

It is very similar to the Bicolored Antvireo (Dysithamnus occidentalis) but the male of this species has white on the wings and the female only has the sides of the gray head (not full head) and on the lower parts it has fine whitish streaks.

Three subspecies T. u. grandior, T. u. unicolor and T. u. caudatus. In Colombia we find the grandior subspecies.

In Colombia it is found on all slopes of the Andes mountain range from 9000 to 2300 m above sea level. Also in western Ecuador and northeast Peru.

This species lives in humid and very humid forests, especially in mountain cloud forests. It can be seen in forest edges although it is not so frequent.

They feed mainly on insects and other arthropods. In stomach contents, remains of seeds have also been recorded.

There is little information about it. Their nest is a deep cup made of fibers and covered on the outside with green plant material, probably moss. Their eggs are creamy white with purple and red brown spots. In Colombia, offspring have been registered mainly in the first half of the year.

It deliberately moves in pairs from the undergrowth to the sub-canopy and climbs vines like other batarás. It moves by making short jumps with periodic pauses of several seconds to explore the vegetation in search of prey. When it is in an alarm state, it raises its tail. It is rarely seen in mixed flocks.

Forms a superspecies with T. aethiops. Subspecies validity needs to be reassessed. Apparently the nominal subspecies and the grandior subspecies hybridize in southwestern Colombia. The description of the male of the subspecies caudatus may correspond to a subadult specimen.