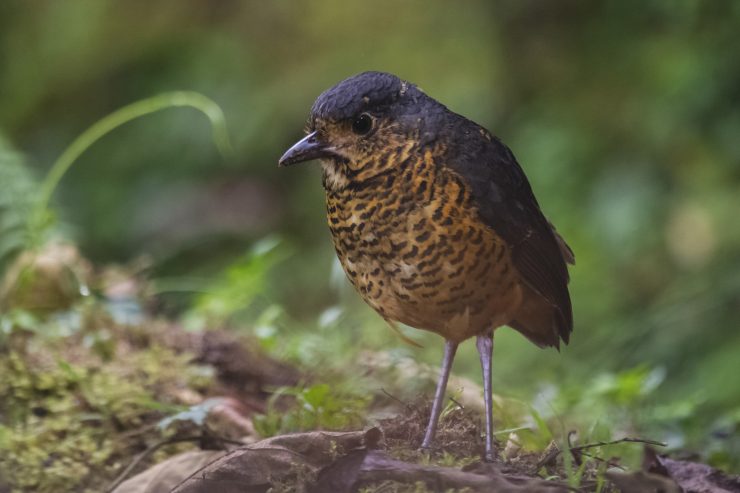 It is one of the largest species in the genus. Its name Grallaria derives from the modern Latin grallarius = stilt man. The epithet squamigera derives from the Latin roots squama = scale and gerere = carry on.

It measures 20 to 23 cm and weighs 131.6 g. Both sexes similar. It has brown irises, bluish-gray to pinkish tarsi and a robust bill with a dark gray upper jaw and a pinkish-gray lower jaw. The adult has a slate gray crown and nape, a loreal area white buff and the rest of the upper parts olive brown with black scales. Their throat is usually white (sometimes ocher) and is surrounded by black whiskers. The sides of the head and the rest of the underparts vary from pale buff to dark ocreous, with barred or blackish-brown scales, except for the center of the belly.

Similar to the Giant Antpitta (Grallaria gigantea) which is larger, without black whiskers and with more cinnamon underparts (not yellowish).

Two subspecies are recognized: G. s. squamigera and G. s canicauda. Only the nominal breed is found in Colombia.

It is distributed throughout the Andes from western Venezuela and through Colombia, Ecuador, Peru to central Bolivia. In Colombia it is distributed from 2300 to 3800 m above sea level and is found in the western mountain range at its northern end in the department of Antioquia in the Frontino páramo and to the south in the departments of Valle del Cauca, Cauca and Narino. In the Central mountain range in the departments of Tolima, Valle del Cauca and Cauca. In the Eastern mountain range in the Choachí páramo region at the latitude of Bogotá and in the Santander department east of Bucaramanga. In 2015 it was recorded for the first time in the Sierra Nevada de Santa Marta, in the El Dorado reserve, approximately 2000 m above sea level.

Its habitat is humid and very humid montane forests where it uses the understory. It also inhabits forests with good coverage of trees and shrubs of the Polylepis genus and is frequently found associated with bamboo growths Chusquea spp. It seems to tolerate a certain degree of disturbance, which is why it can also be found in forests in secondary succession.

Their diet is made up of insects and other arthropods.

In Colombia, individuals in reproductive condition have been registered in the month of August in the extreme north of the Western Cordillera. Also fledglings in November in Ecuador, in December in Bolivia and in March in Peru. Sing only during the reproductive period from hidden perches whose height can vary from 0.5 to 5 m. Other aspects of their reproductive biology are unknown.

It is a mainly terrestrial bird, usually solitary and hidden. It moves on or near the ground by periodically hopping and pausing to search for prey or run after it. After ingesting a prey it commonly fluffs its feathers and flaps its wings.

Some authors suggest that G. squamigera and G. gigantea are sister species. The populations of southeastern Ecuador could represent an independent lineage.

At the national and international level, it is classified as a kind of least concern.