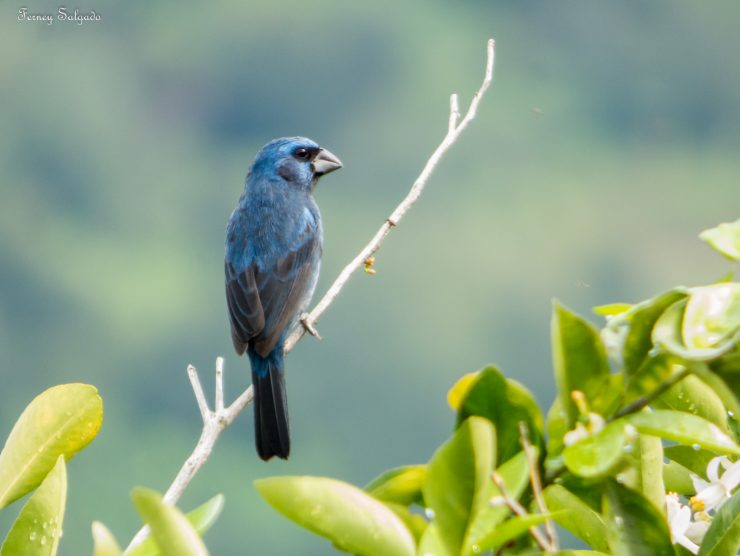 The ultramarine grosbeak (Cyanoloxia brissonii) is a species of grosbeak in the Cardinalidae family. It is found in a wide range of semi-open habitats in eastern and central South America, with a disjunct population in northern South America.

These birds are 15 cm long. The adult male exhibits a dark-blue plumage with bright-blue upper-wings. The females and the juveniles are brown.

Very similar to the Bluebird (Cyanocompsa cyanoides) but the male of the latter species is slightly larger and with a duller rump. The female is deep dark brown, not pale brown.

Five subspecies are recognized C. b. caucae, C. b. minor, C. b. Argentina, C. b. brissonii and C. b. sterea. Only the caucae subspecies is found in Colombia.

The ultramarine grosbeak is territorial, it doesn´t fly in flocks. If a male invades the territory of another, for sure there will be a conflict with some violence.

They inhabit the edge of swamps, secondary forests and plantations. The native range of these birds extends from Northeast and central Brazil, Bolivia, Paraguay to Argentina. It also can be found northern Venezuela and Colombia. There are some morphological differences between subspecies from different regions.

Feeds on seeds, fruits and insects.

It takes place between September and February, builds its nest not far from the ground and each clutch usually has between 2 and 3 eggs. The chicks are born between 13 and 15 days after the eggs are laid.

Sometimes included in the genus Passerina. It probably forms a superspecies with C. parellina and hybridizes with Sporophila caerulescens in the wild.