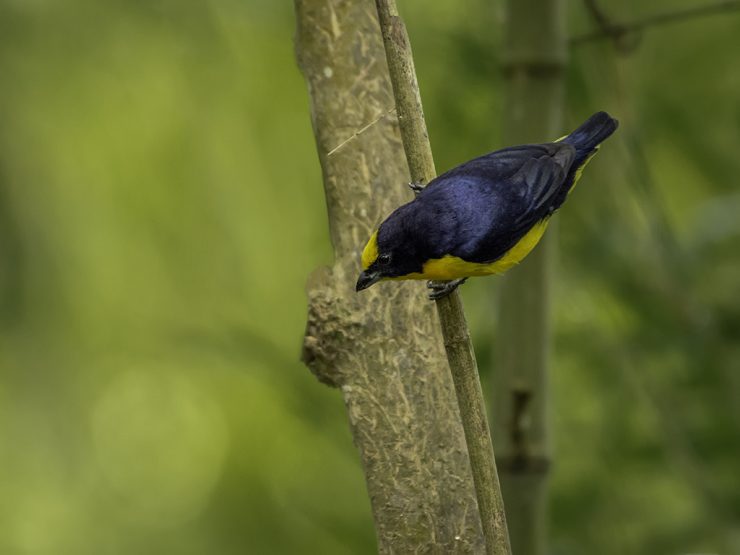 The Thick-billed Euphonia is a species of bird in the family Fringillidae and the order Passeriformes.

It is measures around 11.5 centimeters, it has dark brown iris, grey legs and blackish bill with the base of the lower mandible gray blue. The male of the nominal breed presents yellow from the forehead to the middle part of the crown, has the sides of the head, the back of the crown, nape and upper parts of lustrous black color and the top surface of its tail is dark blue. Its lower parts are bright yellow and the lower surface of its dark grey tail with the inner margin of the two or three pairs of external rectrices of white color.

The female is yellowish olive green above and greenish yellow below, slightly paler in the coverts.

It is located from the Pacific coast of Costa Rica to the south by Panama, Colombia, north and west of Venezuela, Pacific coast and east of Ecuador, Peru, northern Bolivia and Brazil. In Colombia it is below 1100 m above sea level (rarely up to 2400 m) in the Pacific region from borders with Panama to the Cauca Valley, also in the Caribbean region to the eastern base of the Sierra Nevada de Santa Marta and from there to the south to the north of the eastern Andes and through the valleys of the Cauca and Magdalena Rivers. In the eastern base of the Andes and in the departments of Arauca, Casanare, Vichada and north of Guainía to the west by the departments of north of Guaviare, Meta, east of Caquetá and Putumayo. Also in the south of the department of Amazonas.

Because of its wide distribution it occupies a great variety of habitats. It is found in secondary forests, forest edges and clearings in wet and dry regions, partially open areas, gallery forests, plantations, várzea forests and river islands in different states of succession.

It feeds mainly on fruits.