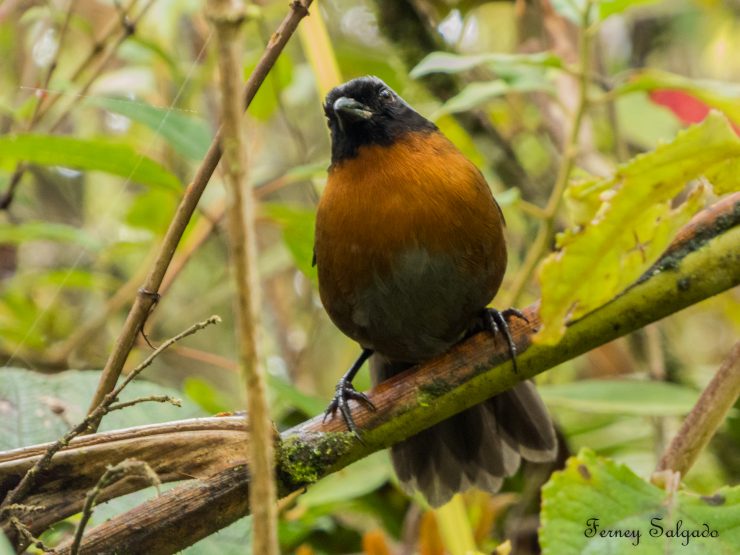 This species is in a VULNERABLE conservation status at the international level and has a very localized distribution in the western Andes. Its name Oreothraupis derives from the Greek roots oros = mountain and thraupis = small unknown bird, which in ornithological terminology also means tanager. Its epithet arremonops derives from the Greek roots arrhemon = silent and ops = which resembles, referring to its affinity with the species of the genus Arremon.

It is around 20 cm of lenght. It is a large bird with a relatively short beak with a curved culm and an upper jaw that protrudes above the lower one. Its head is black with broad silver-gray stripes on the crown and eyebrows of the same color that extend to the sides of the neck. Its upper parts are of a rusty olive-washed color and the wing coverts and tail are blackish with rusty edges. The chin and upper part of the throat are black with the lower part of the throat rusty bright olive wash on the flanks. It has a distinctive bright white V-shaped belly patch that extends past the lower chest. The irises of their eyes are dark brown, their beaks are black and their legs are pale brown. Both sexes are similar. Juveniles paler and brown than adults with barely hinted head coloring pattern.

This species is found in the western Andes of Colombia and the northwest of Ecuador. In Colombia it is found between 1700 and 2500 m above sea level in the departments of Antioquia, Risaralda, Valle del Cauca, Cauca and Nariño. Specifically in the Munchique National Natural Park, La Planada Natural Reserve, Farallone de Cali National Natural Park in the town of Alto Anchicayá.

It inhabits the understory of mature humid mountain forests, often in cloud forests with an abundance of moss.

It is a stealthy bird that generally stays in pairs or in family groups. Forages on or near the ground in damp places under low bushes. Sometimes it is observed on the ground rummaging in the litter, also exploring and pecking at foliage, stems and fruits.

Their taxonomic relationships are not clear. It was initially included in the Cardinalidae family in the genus Saltator based on the structure of the beak. It has also been classified in the Thraupidae family, but currently and according to characteristics of plumage, behavior, nesting and song, it seems to be related to the genus Atlapetes.

It is currently in a VULNERABLE state and its population size is estimated to be 10,000 to 19,000 individuals. Its main threat is the loss of habitat as a result of the development of road infrastructure works, logging, gold mining, and cattle ranching. This species is absent in apparently suitable habitats and therefore the causes of its rarity are unknown. As conservation measures, it is proposed to guarantee the conservation of the forests in the reserves in which the species is found, as well as the increase in their extension. The establishment of a Binational Biosphere Reserve in the Awá indigenous territory in Colombia and Ecuador has also been recommended.