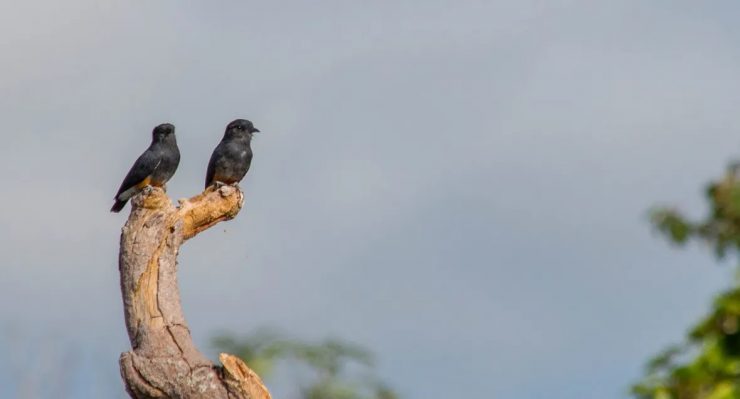 It is the only species of the genus. It is found to the east of the Andes and its optimal breeding habitat is open areas with sandy soils and scattered shrubs surrounded by forest. Its name Chelidoptera means swallow wings and derives from the Greek roots khelidon = swallow and ptera = wings. Its tenebrous epithet derives from the Latin tenebrosus = dark, shady.

It is 14 to 15 cm of lenght and weighs 30 to 41.5 g. It has a wide and short black bill, dark brown irises, and dark gray or black legs. It is mainly glossy black with some iridescent blue on top. It has a white lower back and uppertail-coverts forming a conspicuous list on the fly. It has long, pointed wings with longer tertials. Its tail is short, square, wide and black in color. It has a whitish chin and a grayish throat with long feathers. Its chest is graded from black to gray and has an orange band on the undersides. It has white undertail-coverts, lower wing-coverts and axillaries. The immature ones are similar to the adults.

It could be confused with a swallow of the genus Progne due to its plump silhouette but it differs from these by its cinnamon belly, white list on the back and wide wings.

It is found in the northwest in Venezuela, eastern Colombia, Guianas, eastern Ecuador, eastern Peru, Brazil and northern Bolivia. In Colombia it is found below 500 m above sea level east of the Andes.

It inhabits hummid forests and gallery forests, bushes and is common along rivers with sandy shores. This species seems to be confined to areas of sandy soils where it is able to excavate its nests.

It feeds mainly on insects among which ants, hymenoptera (apidae), beetles, crickets, mosquitoes, cicadas, bed bugs and termites have been recorded.

Their breeding season in Suriname roughly coincides with the dry season. In Colombia, individuals have been recorded excavating nests in the month of February in Mitú and Meta. Also nests from February to June in the Venezuelan Orinoco. Their nest is an oblique tunnel, usually dug in flat sandy soils or sandbanks, usually near rivers. The size of its position is 1 or 2 eggs, which incubate for 15 days. The period of hatchling development remains undocumented.

It is a calm bird that stays alone, in pairs or in small groups. Commonly seen perching from ground level in sandy ravines to canopy on exposed branches. It captures its prey mainly on the fly through direct and fast pursuits and returns more slowly to the perch making a wavy flight finished with an upward glide. Their prey are usually engulfed in flight.

In the international field, it is considered as least concern.