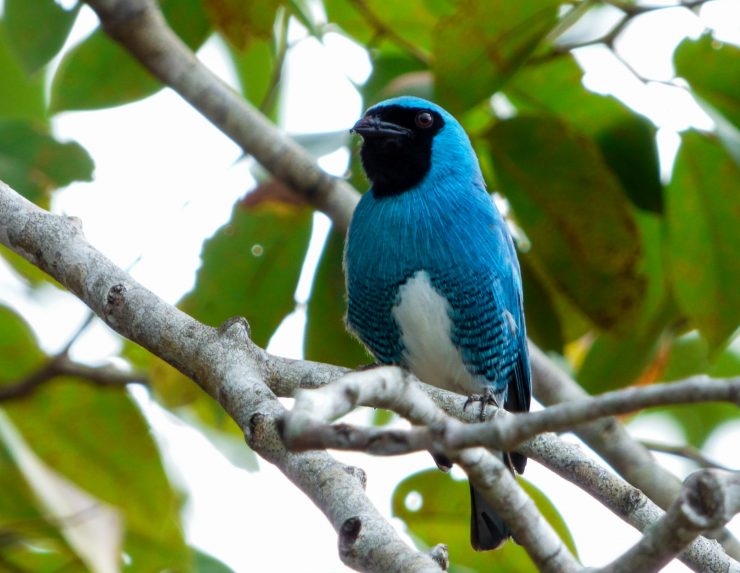 Tersina is a genus of tanager. It contains a single species, the swallow tanager (Tersina viridis). It is found widely throughout South America, from eastern Panama to far northern Argentina.

It is 14 to 15 cm length. It has a very strong sexual dimorphism. The plumage of the male is bright blue with a black mask and throat; It has a white belly and chrysum. The female is bright green on the back and greenish yellowish on the undersides, with striated flanks.

The species T. viridis was first described by the German zoologist Johann Karl Wilhelm Illiger in 1811 under the scientific name Hirundo viridis; its type locality is: «Sandwich Islands, error, amended for eastern Brazil.»

The genus Tersina was proposed by the French naturalist Louis Jean Pierre Vieillot in 1819, with Tersina coerulea as the type species, which turned out to be a later synonym for the present species.

The generic name Tersina derives from the French word «tersine», used by Buffon to designate an unidentified bird; and the name of the species «viridis» from Latin which means: green, in reference to the color of the female.

Recent extensive phylogenetic studies demonstrate that the present species is a close relative of Cyanerpes, in a Dacninae subfamily.

According to theclassifications of the International Ornithological Congress (IOC) [15] and Clements Checklist / eBird v.2019 [16], three subspecies are recognized, with their corresponding geographic distribution:

This species is widely disseminated and visible, generally in semi-open terrain, on the edges of humid forests, in clearings with scattered trees and in gallery forests, up to 1800 m of altitude. It is nomadic and can be seasonally or locally common.

It feeds on fruits and insects, which it can catch in flight. Due to the shape of the beak and head, it is capable of collecting various fruits, taking them and storing them in a hidden place. [12] Consume a variety of fruits, including berries and avocado, as well as various insects, such as termites, grasshoppers, and ants. [10]

The female digs a ravine and makes the nest at the bottom of the tunnel, where she lays two to four eggs, [12] which she incubates for 13 to 17 days. The chicks, fed only by the female, leave the nest after about 24 days. The male is only in charge of guarding the nest.

The call is a sharp and non-musical «tziip», distinctive and often given in flight.