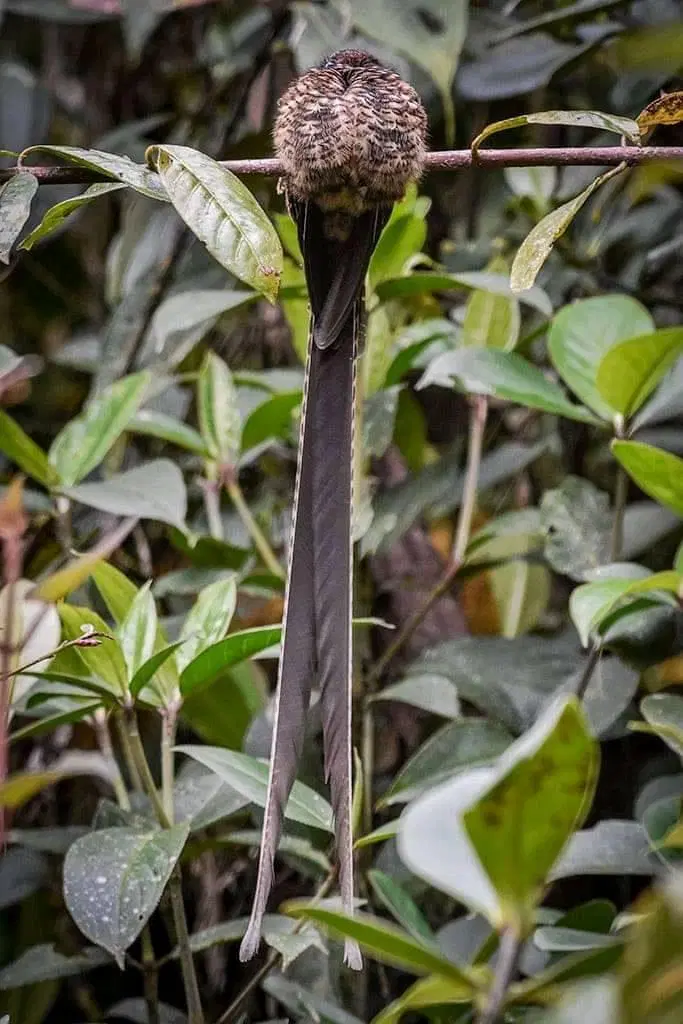 It is a quite characteristic bird with a long tail that is more than twice that of its body. Replaces the Lira Road Guard (Uropsalis lyra) at altitudes above 2500 m. Its name Uropsalis means scissor tail and derives from the roots oura = tail and psalis = scissors. Its epithet segmentata derives from Latin and means ornamented with golden or purple edges.

It is 20 to 22 cm of lenght, males with tails that can reach 40 to 57 cm in length. Females weigh around 57 g and males around 45 g. It is a bird with dark brown upperparts with fawn spots and barred wing coverts spotted with fawn and buff. Their underparts are also dark brown with tawny-colored spots, before which they become barred on the flanks and belly. It also has a weak fawn-colored throat patch which may be absent at times. Male has elongated outermost pair of tail feathers with buff notched outer edges and white rachis. The female has a black rufous-spotted crown and a shorter, darker tail. Both sexes lack white markings on the wings.

Very similar to the Lyre-tailed Nightjar (Uropsalis lyra) but smaller, darker, without a nuchal collar and at higher altitudes above sea level. The Band-winged Nightjar (Caprimulgus longirostris) is distinguished from the present species by buff or whitish wing bands.

Two subspecies U. s. segmentata and U. s. kalinowskii, the latter smaller in size. Only the nominal subspecies is found in Colombia.

It is found in the Andes of Colombia, Ecuador, Peru, and Bolivia. In Colombia it is found from 2,500 to 3,500 m above sea level in the Central mountain range in the department of Antioquia, Caldas, eastern Cauca and western Huila. In the eastern mountain range in Boyacá, east of Huila and near Bogotá in the Choachí moorland.

It inhabits humid forests, cloud forests, dwarf forests and on the moorland where it uses clearings and forest edges and may seem to prefer areas with bamboo or thick grass growths and shrubby vegetation.

Its diet has been poorly studied but like other members of the family it probably feeds on insects.

In Colombia, females with chicks have been registered in August in the department of Caldas and in February in Huila. Males form leks during this time. Other aspects of their reproductive biology are unknown.

It is a nocturnal bird that rests during the day in road ditches or under bushes such as frailejones (Espeletia). It captures its prey by short flights from low perches or sometimes from the ground to higher perches in open areas and forest edges. Sometimes it perches at night on the roadsides. During the breeding season, males perform courtship behavioral displays in communal leks where they attract females.

The subspecies kalinowskii was previously considered a distinct species and was classified in the genus Macropsalis. It has also been proposed to classify the present species in the latter genus using the shape of the tail as a distinctive character. However, such a difference is not enough to merit such a distinction in a separate genre.

In the international Field, it is considered as a species of least concern.