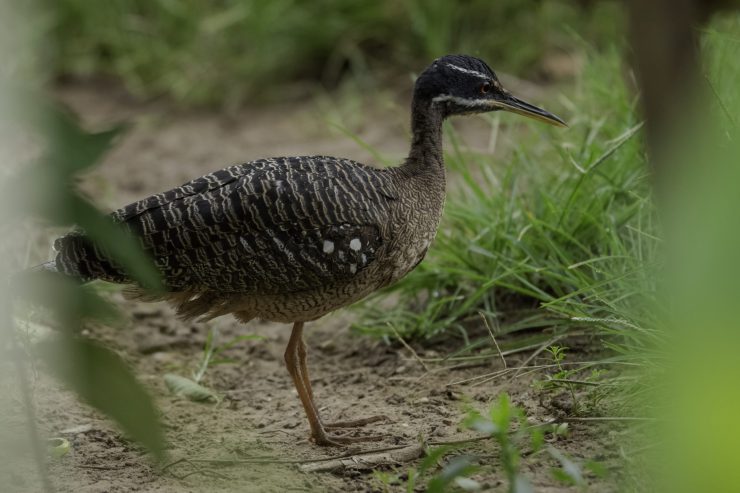 The Sunbittern a bittern-like bird of tropical regions of the Americas, and the sole member of the family Eurypygidae (sometimes spelled Eurypigidae) and genus Eurypyga. It is found in Central and South America, and has three subspecies. The sunbittern shows both morphological and molecular similarities with the kagu (Rhynochetos jubatus) of New Caledonia, indicating a gondwanic origin, both species being placed in the clade Eurypygiformes.

The Sunbittern is usually placed in the Gruiformes, but this was always considered preliminary. Altogether, the bird is most similar to another bird that was provisionally placed in the Gruiformes, the kagu (Rhynochetos jubatus). Molecular studies seem to confirm that the kagu and sunbittern are each other’s closest living relatives and have a similar wing display. They are probably not Gruiformes (though the proposed Metaves are just as weakly supported). Altogether, the two species seem to form a minor Gondwanan lineage which could also include the extinct adzebills and/or the mesites, and is of unclear relation to the Gruiformes proper. Notably, the kagu and mesites also have powder down.

The bird has a generally subdued coloration, with fine linear patterns of black, grey and brown. Its remiges however have vividly colored middle webs, which with wings fully spread show bright eyespots in red, yellow, and black. These are shown to other sunbitterns in courtship and threat displays, or used to startle potential predators. Male and female adult sunbitterns can be differentiated by small differences in the feather patterns of the throat and head. Like some other birds, the sunbittern has powder down.

The sunbittern has a long and pointed bill that is black above, and a short hallux as in shorebirds and rails. In the South American subspecies found in lowlands east of the Andes, the upperparts are mainly brown, and the legs and lower mandible are orange-yellow. The two other subspecies are greyer above, and their legs and bill are sometimes redder.

The sunbittern’s range extends from Guatemala to Brazil. The nominate race, E. h. helias, is found east of the Andes in lowland tropical South America, from the Orinoco basin, through the Amazon basin and Pantanal. The subspeciesE. h. meridionalis, has a more restricted distribution, being found along the East Andean slope in south-central Peru, in the lower subtropical zone at altitudes of 800–1,830 m (2,620–6,000 ft). The final subspecies, E. h. major, is found at various altitudes ranging from southern Guatemala, through Central America and the Chocó to western Ecuador. This subspecies may also be present in southern Mexico. It has been traditionally reported from the Atlantic slope of Chiapas, but no specimens are known and there have been no recent records.

The species is found in the humid Neotropical forests, generally with an open understorey and near rivers, streams, ponds or lagoons.

They are cryptic birds that display their large wings, that exhibits a pattern that resemble eyes, when they feel threatened.

The sunbittern consumes a wide range of animal prey. Insects form an important part of the diet, with cockroaches, dragonfly larvae, files, katydids, water beetles and moths being taken. Other invertebrate prey includes crabs, spiders, shrimps and earthworms. They will also take vertebrate prey including fish, tadpoles, toads and frogs, eels and lizards.

Sunbitterns are one of 12 species of birds in five families that have been described as fishing using baits or lures to attract prey to within striking distance. This type of behaviour falls within the common definition of tool use. In sunbitterns this behaviour has only been observed in captive birds so far.

Individuals in reproductive condition have been recorded in the month of March in Chocó and nests in March in Costa Rica.

Sunbitterns start nesting in the early wet season and before it starts they make flight displays 10–15 m (33–49 ft) high in the forest canopy. They build open nests in trees, and lay two eggs with blotched markings. The young are precocial, but remain in the nest for several weeks after hatching.

Initially called Ardea helias. Previously the Eurypygidae family was considered within the order Gruiformes but in 2010 it was included in the new order Eurypygiformes. It appears to have many morphological and behavioral affinities with members of the family Rhynochetidae and Rostratulidae respectively.

It is currently classified in the category of least concern and although the population is showing a downward trend, it is not occurring fast enough to reach the vulnerability threshold.