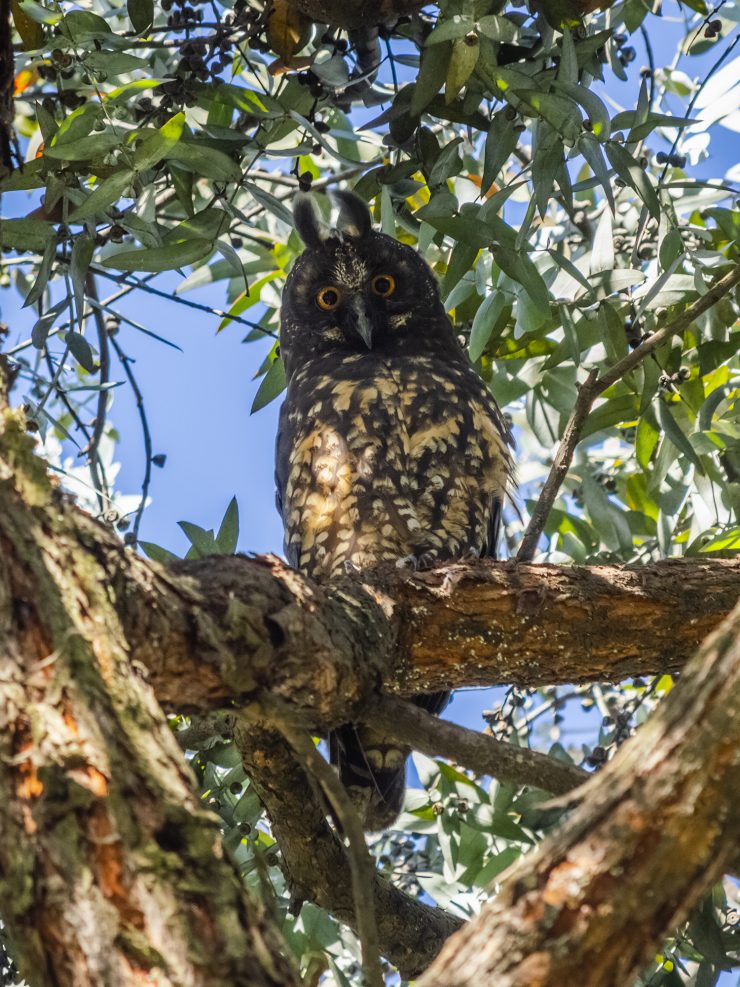 The blackish owl (Asio stygius) is a species of strigiform bird belonging to the genus Asio that is part of the family Strigidae. It is native to the Neotropics.

The species A. stygius was described for the first time by the German naturalist Johann Georg Wagler in 1832 under the scientific name Nyctalops stygius; type locality «Minas Gerais, Brazil».

It has been proposed that this species be included in Pseudoscops, but recent DNA studies seem to confirm its placement in Asio; very close relative of Asio otus. Populations of northwestern South America are usually placed in robustus, sometimes in the nominal subspecies; the subspecies lambi, noctipetens, and barberoi are poorly differentiated and possibly invalid.

According to the classification of the International Ornithological Congress (IOC) (Version 4.4, 2014) and Clements Checlist 6.9, 6 subspecies are recognized, with their corresponding geographical distribution:

It measures between 38 and 46 cm weighing between 632 and 675 g, the female is heavier. Large and understated, her entire appearance is somber. It has two long tufts of black feathers on its head that are mistaken for «ears» or «horns». Yellow-orange eyes. Brownish-black face with whitish eyebrows and a clearly visible light spot on the forehead between the “ears”. Dorsal parts black-brownish with scattered light spots. Underparts buffy or dirty white with the chest all dark stained and thick black-brownish stripes in the shape of a herringbone in the rest; blackish outer shirts. Tail dark brown barred brown. Her fingers are bear with feathered tarsi. The beak is black.

In Cuba, it is rare. Present in isolated areas, semi-deciduous or pine forests of the Isla de la Juventud, the mountains of Pinar del Río, the Zapata peninsula, the Guamuhaya Mountains and the Sierra Maestra.

It has been twice occasionally registered in Texas, United States.

It inhabits a variety of environments such as humid montane and deciduous forests, highland forests, araucaria, humid Chaco, wooded islets in the savannah, open wooded areas, plantations, parks. Between 700 and 3000 meters above sea level.

Solitary, it perches in leafy trees during the day, sometimes in plantations of exotic species (such as pines), generally close to the trunk, where it is more difficult to be seen. Sometimes it is active before dark. It can frequent the proximity of houses, hunting around constructions and even posing in them. It does not fly in daylight.

To hunt, she chooses a leafless branch as a watchtower where she perches, waiting to see birds up to the size of an urban pigeon, reptiles, small mammals, even bats that serve as food. Their strategy consists of moving from perch to perch, seeking to locate sounds involuntarily emitted by their prey when brushing against the foliage.

During the reproductive period, which coincides with spring in the southern hemisphere, it is common for the male and female to vocalize together near the nest site. It nests in tree cavities or rarely on the ground itself, but there are also observations of the occupation of large nests of other birds, such as hawks and herons. The feeding of the young occurs during the night until dawn. The laying is of two white eggs.

Despite being globally considered «not threatened» by the IUCN, in Cuba it is considered threatened with the category of «vulnerable». In the 19th century it was very common in this country, but due to clearings, currently only the forests of the mountains are found. Her persecution by peasants who out of superstition attribute bad luck to her hooting has also contributed to her decline.

The most typical call is a short, loud and low hoot, “huu”, repeated at intervals of 5-10 seconds. It also gives a «pee-pee» like a caller stealthily.