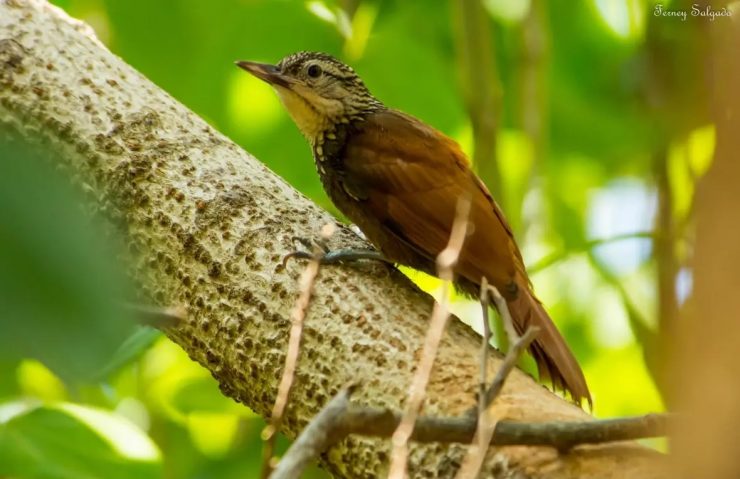 Quite polytypical and widely distributed in the country. Its name Dendroplex derives from the Greek roots, dendron = tree and plesso = to hit. The epithet picus comes from Latin and means nuthatch.

It measures 18 to 22 cm, the male weighs 34 to 42 g and the female 33 to 45 g. Both sexes similar. It has reddish brown to dark brown irises, grayish to brownish horn-colored bill with blackish upper jaw base and dull olive green legs. Nominal breed has little distinctive white eye ring, dark postocular striae, brown earphones with buff white striations, whitish forehead, crown and nape of dark brown to blackish buff white striations, which become more elongated at the nape. Its back, scapulars and lesser coverts are olive brown to reddish brown with a few striations on the upper back. It has a low back, rump, remiges and rufous brown tail; chin and throat white buff with throat feathers narrowly margined from dark brown to black, buff underbigotera, low throat and high chest with pale buff hubs surrounded by black providing scaled appearance. The rest of its lower parts are brown, sometimes more olive in the belly; undercaudal coverts with whitish striatum and rufous cinnamon lower wing-coverts. The young individual is darker with a smaller striatum and a shorter, darker bill.

Very similar to the Zimmer’s Woodcreeper (Dendroplex kienerii) which is distinguished by a scalier pattern on the chest, more brownish or olive belly, proportionally shorter wings and tail. Striped Woodcreeper (Xiphorhynchus obsoletus) has a darker, slightly curved bill and a striated upper part that extends to the lower back.

Thirteen subspecies are recognized, of which six are found in Colombia: D. p. extimus, D. p. dugandi, D. p. picirostris, D. p. saturatior, D. p. duidae and D. p. picus. The extimus breed is found in the Lower Atrato and Upper Sinú Valley. The dugandi subspecies is endemic to the country and is found in the north of Chocó, the Magdalena valley and lowlands from the south of Santa Marta to the Serranía de Perijá. The picirostris breed is found in the northwest of Santa Marta to La Guajira. The saturatior subspecies in the eastern base of the Andes, the duidae race in eastern Vichada and the picus subspecies in the southeast of the country.

It is found in central and eastern Panama, Colombia, Venezuela, Trinidad, northeast Ecuador, eastern Peru, northern Bolivia, and the Brazilian Amazon. In Colombia it is found below 600 m above sea level from the north of the department of Chocó through the lowlands of the Caribbean coast to La Guajira, Serranía del Perijá, the Magdalena valley to the north of Huila and east of The Andes.

It is found in a wide variety of lowland habitats such as mangroves, arid scrublands, gallery forests, dry forests and humid forests of varzea and terra firme. It frequents a wide variety of semi-open habitats: wooded gardens and parks, secondary forest, hedges, tall stubble, and isolated trees in paddocks and fields. It is commonly found near bodies of water and in the Amazon region it is one of the few species of the family that is found on river islands.

Its diet is mainly composed of arthropods and in less quantity of small vertebrates and fruits. Beetles, ants, insect larvae, spiders, cockroaches, wasps, scorpions, pseudoscorpions, termites, snails, seed remains, and lizards have been recorded in their stomach contents.

In Colombia, individuals in reproductive condition have been recorded from January to October on the western slope of the Eastern Cordillera and one individual with an incubation patch in November in Santa Marta. It nests in natural cavities that occur between palm leaves, between bromeliads and tree branches, arboreal termite mounds or abandoned carpenter cavities, generally at heights ranging from 1 to 9 m. It lays 2 or 3 white eggs, which are incubated by both members of the pair for 17 days. Young remain in nest for 17 to 18 days after hatching. In the north of Colombia it has been found that their nests can be parasitized by Molotrus bonariensis, which constitutes the only case of parasitized climbers.

It is foundRaised alone, in pairs, family groups, and occasionally with mixed flocks. Forages while climbing branches and small trunks from high understory to sub-canopy. It captures its prey mainly by gleaning or pecking in the cavities of bark and sometimes explores in the terminations of split branches and in dead leaves. It also forages in arboreal ant nests and has been observed on very few occasions following the march of legionary ants.

Initially classified in the Dendroplex genera and later in Xyphorhynchus. The «picirostris group» made up of the subspecies of Panama, north and northwestern South America, were previously treated as a distinct species.