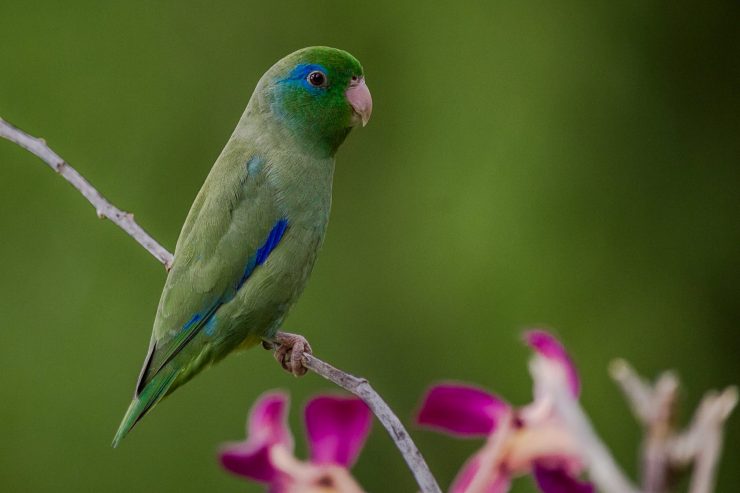 Spectacled parrotlets are endemic to Middle and South America, including northern and central Colombia, Venezuela, and eastern Panama (subspecies can be found in specific regions of Colombia and Venezuela, see above). Natural habitats are lowland evergreen forest edge, thorn scrub, llanos, gallery woodland, and heavily degraded former forest or low-density woodland. Spectacled parrotlets are not found at altitudes higher than 1,600 metres (5,200 ft) above sea level.

Green and blue coloring helps spectacled parrotlets camouflage with the tropical trees in their habitats. Though color mutations such as the yellow pied mutation may occur in captivity, they are rare in wild due to the fact that a brighter color compromises a bird’s ability to hide from predators.

According to the IUCN Red List, spectacled parrotlets are of Least Concern. Their populations are stable and possibly increasing due to deforestation and land development, as they prefer open habitat rather than dense forest. There are many protected areas across their range.

In the wild, spectacled parrotlets feed on seeds, nuts, leaves, berries, cactus, Tamarindus sp., and other fruits. Occasionally they may feed on small insects. They have also been observed licking or eating clay. These clay licks provide a good source of minerals, such as calcium.

Spectacled parrotlets are highly social and live in small flocks, but can be seen in large flocks of up to 100 individuals on clay mounds drinking runoff  or eating clay. Male near nest entrance

The bright color of the male and specific mating calls attract the female to the male parrotlet. Spectacled parrotlets typically breed between January and March.

Spectacled parrotlets nest in tree cavities or similar structures. Often they will make use of abandoned tree hole or clay mountain nests created by other unrelated bird species, though they are also capable of creating new nests. The female incubates eggs while the male assumes the role of guarding the nest and feeding the female and chicks once they are hatched. Spectacled parrots are monogamous and some pairs may even mate for life.

Once a female lays one egg, she will lay another every two days until clutch size is reached. Typically, a couple will hatch 4-6 eggs per clutch after an 18-day incubation.

Babies fledge at about five weeks old, and siblings keep in close contact with one another for a few weeks post-fledging. Birds from the same clutch use specific calls and continue to feed each other and play until they are self-sufficient and mature.

Spectacled parrotlets are able to differentiate between social companions and adapt their calls to mimic the call of the bird they are communicating with. Specific calls are used when communicating with other birds. These calls are sometimes described as “names”.

Calls can range between tweeting, chirping or buzzing sounds, depending on the information being relayed.