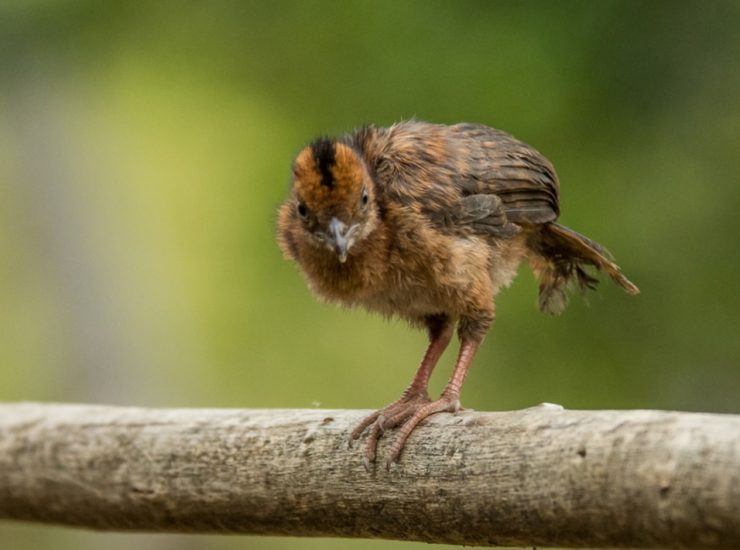 It is a small chachalaca of 53 cm in length. It does not have sexual dimorphism. It is characterized by presenting the front of the neck and chest mottled with white. The legs are pink in color, the bill is slightly curved and light gray, it has a long reddish-brown tail and the general coloration of the body is also this color. Its coloration is variable depending on the subspecies, for example, guttata has a dark brown head, neck and chest and the area mottled with white on the chest and neck, while in subaffinis the mottled pattern is not so evident.

Previously it was considered that it formed the same species with the Colombian Chachalaca (Ortalis columbiana). It can be confused with this one due to its similar size and shape, but it differs in that it presents the front part of the neck and chest scaled white and not mottled like the Variable Guacharaca. Their distribution does not overlap.

Two subspecies are recognized: O. g. guttata and O. g. subaffinis. Only the nominal breed is found in Colombia.

It is distributed throughout much of South America, being found in Venezuela, Colombia, Ecuador, Peru, Brazil and Bolivia. The guttata subspecies is found in the eastern zone of Colombia to Peru, in Brazil the three remaining subspecies are distributed, araucan in the east, squamata in the southeast and subaffinis in the northeast of Bolivia and the contiguous zone of Brazil.

This Chachalaca can be found in palm groves, scrublands, lowlands and hills, forest edges and humid jungle, and disturbed areas such as secondary growth vegetation and abandoned grasslands.

Its diet consists mainly of fruits, acting as a disperser of small seeds. Prefers the fruits of Yarumo (Cecropia spp) and Bear’s Hand (Dendropanax colombianus)

The breeding season is between October and November. They make the nest in the trees with branches and vegetation generally 2 meters above the ground. The female lays two or three white eggs.

It is found in pairs in the reproductive season and in medium groups of 6-12 individuals in the other seasons. It has arboreal habits and is frequently found on the ground. His demeanor is sociable.

It is currently classified in the category of least concern, because it is a very abundant species and has been adapted to disturbed areas, but it is necessary to implement preventive measures, since in some localities it is subject to high hunting pressure.

Mayor of Santiago de Cali, DAGMA. 2010. The birds of my city: a guide to the birds of Cali. Cali, Colombia.