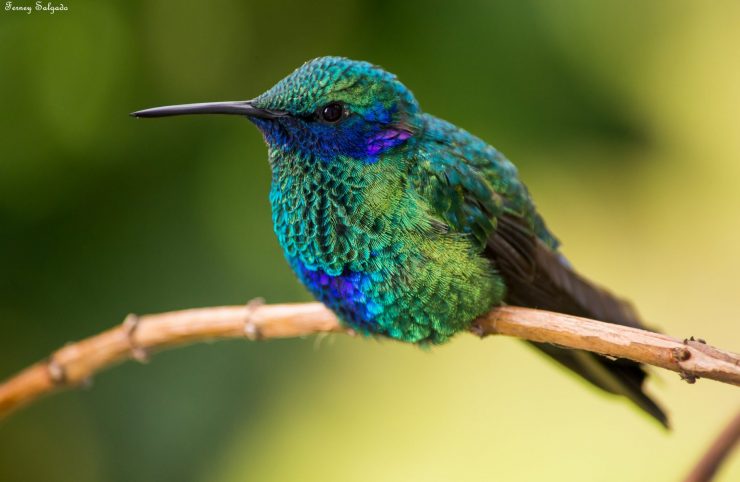 This hummingbird is a fairly territorial bird characteristic of highlands where it is commonly found in semi-open areas. Its name Colibri comes from the Spanish language and is supposedly based on a Caribbean term. The epithet coruscans comes from Latin and means sparkling or brilliant.

This is a large hummingbird. The male weighs about 7.7 to 8.5 grams and the female between 6.7 to 7.5 grams. It has a length of 13 cm. Its beak is robust, measuring about 25 mm and almost straight. It is mainly bright green in color. It has a narrow iridescent violet patch from below the beak to behind the auricular region. It sports a large iridescent purple-blue patch from the center of its chest to its abdomen. Its tail is a bluish green hue with a conspicuous dark subterminal band.

It is easily confused with the Mexican violetear (Colibri thalassinus) but is smaller, generally found at lower elevation, and lacks blue on the chest and abdomen.

Two subspecies are recognized C. c. germanus and C. c. coruscans, only the nominal subspecies is found in Colombia.

It is found in Colombia north of Venezuela, east of Guyana, north of Brazil and through the Andes to western Argentina. It is distributed from 1300 to 3600m above sea level (mainly 2100-3100) in the Sierra Nevada de Santa Marta, the Serranía de Perijá and in the central and western Andes. Also in the Eastern mountain range from its extreme north to the south to Bogotá.

It is common on highland mountain edges, paddocks with scattered trees, parks and gardens.

It feeds mainly on the nectar of erect or horizontal flowers. Catch insects while flying among which Diptera have been identified.

Breeding times vary by region. In Colombia, in the extreme north of the Western and Central mountain ranges, it breeds from May to September. In Venezuela, these birds breed between June and October. The size of its position is two eggs, it builds a small cup-shaped nest mainly with twigs and other plant materials. The eggs are incubated for 17 to 18 days and the hatchlings fledge in three weeks. The male probably helps in the construction of the nest and in some cases participate in the incubation of the eggs.

It is a highly territorial and vocal that forages at variable heights mainly on erect or horizontal flowers. It also hunts insects in the air and usually sings from high, exposed perches. In deployment behavior, it flies vertically a few meters, sings, closes its wings, opens its tail and swoops back to the perch. They are aggressive and attack other hummingbirds in defense of their territory. They are often set up next to an abundant food source such as flowering shrubs or a hummingbird feeder and again and again scare off other hummingbirds who want to feed on such a resource. Encounters between two males of this species usually produce the rapid flight of one of these, but sometimes they face each other for a long time. Then, it is possible to see how they extend, as if they were «ears», the blue-violet feathers that they have on both sides of their head.

This species is in the category of least concern

There is evidence that C. coruscans together with C. thalassinus use the same song patterns when forming aggregates.