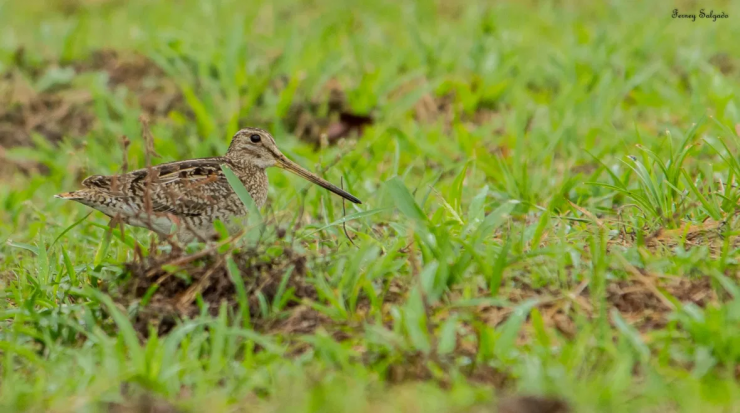 This species is found east of the Andes. Its taxonomic limits with nearby species such as G. delicata and G. andina have been difficult to establish. Its name Gallinago means similar to a hen and derives from the Latin roots gallina = hen and ago = similar to. Its epithet Paraguaiae refers to Paraguay.

It is from 22 to 29 cm lenght. Both sexes are similar. It has a long, thick and straight yellow bill with a dark tip. Above it is dark brown variegated with cinnamon, buff and black. Its head is yellowish brown with two black stripes and whitish superciliary stripes. Its belly is white, the chest is densely striated ocher and blackish, and it has black bars on axillary feathers. Their undertail feathers are buff colored with narrower and less buffy outer rectrices. The female is slightly larger than the male. The young are similar to the adult but with the wing coverts with buffier margins.

Very similar to the Wilson’s Snipe (Gallinago delicata) but differs from it because it has more white on the edges of the tail and a whitish superciliary list instead of yellowish.

Two subspecies G. p. paraguaiae and G. p. magellanica, of which only the nominal subspecies is found in Colombia.

It is found from eastern Colombia and through Venezuela and Guianas to Tierra del Fuego. In Colombia it is found east of the Andes in the departments of Meta, Vaupés and Amazonas.

It feeds mainly on invertebrates such as insect larvae and earthworms. No further information is known about it.

The Paraguaiae breed found in Colombia probably breeds from late November onwards. A nest has been recorded in a hillock of grass and tall grasses and appears to lay 2-4 eggs. Other aspects of their reproductive biology are unknown.

The paraguaiae subspecies makes seasonal movements in response to the availability of humid environments. It is fed by exploration or probing in the mud.

The Gallinago genus was previously called Capella. The taxonomic status of this species and others of the genus is quite uncertain. Some authors consider G. paraguaiae, G. magllanica and G. andina as conspecific. This species has also come to be considered conspecific with G. delicata.