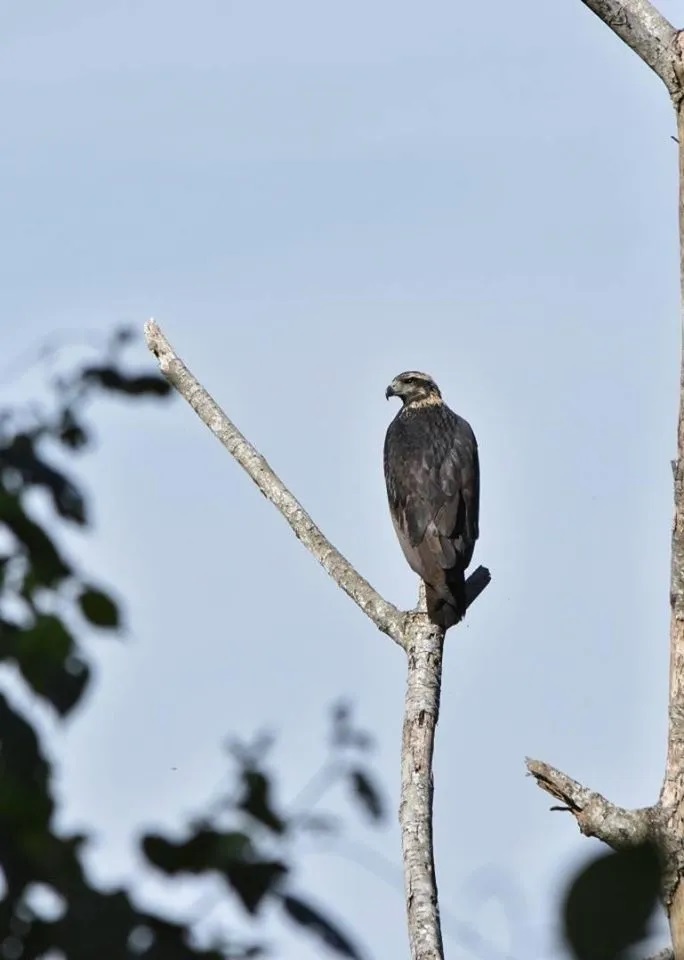 The Solitary Eagle is a large, little-studied raptor that inhabits mountain forests. It is listed globally as Near Threatened (NT) and in Colombia as ENDANGERED (EN) due to hunting, destruction and fragmentation of its habitat.

It is 76cm in lenght and weighs approximately 3kg. It is very large and robust, with very wide wings; in flight, the tail barely protrudes behind the trailing edge of the wings. In adults the general coloration is slate gray. The nuchal crest is thick. The primaries have a light barreled or light gray mottling underneath, and the upper tail-coverts have white tips. They have a wide white medial band on the tail, and sometimes a narrow interrupted basal band. The iris is cream-colored, the wax, the loreal area and the legs are yellow.

Easily confused with the Great Black-hawk (Buteogallus urubitinga). When immature it is distinguished from C. major by its larger size, it is mottled black underneath more extensively, especially on the chest and tibiae, and it does not have the prominent caudal barred.

In Colombia we find the nominal subspecies solitarius.

Up to 2200m. It is located on the Slope of the Sierra Nevada de Santa Marta, in the Serranía de Perijá, Cordillera Occidental in Cauca and in the Cordillera Oriental in the west of Caquetá. It is also found in northwestern Mexico, northern Venezuela, Bolivia, and northwestern Argentina.

They prefer terrains with thick forests and undulating or mountainous terrain. It is found mainly distributed in the foothills of cloud forests. However, it is possible to detect it in lower slopes.

It feeds mainly on snakes, also on birds and small mammals.

Their nest consists of a platform built with twigs and green leaves, including palm fronds. It is located very high in the trees in which the female lays an egg.

As its name suggests, it is generally solitary, occasionally walking in pairs, climbing heavily on flat wings, at varying heights over hilly forest or mountains, or in long descending glides along narrow montane valleys.

Closely related to Buteogallus urubitinga and the SACC accepted the proposal to include this species within the genus Buteogallus. It is also related to B. coronatus.

It is currently classified as Near Threatened globally and in Colombia it is considered an endangered species. Populations are small and may be declining due to habitat loss. This species is apparently rare and little known, to which is added the problems of identification of the species, so its real state of conservation is very difficult to establish.

It is recommended to evaluate the populations in the Tayrona NP and the Munchique NP, determine priority areas for their conservation and evaluate the connectivity between forest patches to increase the availability of habitats of the species.