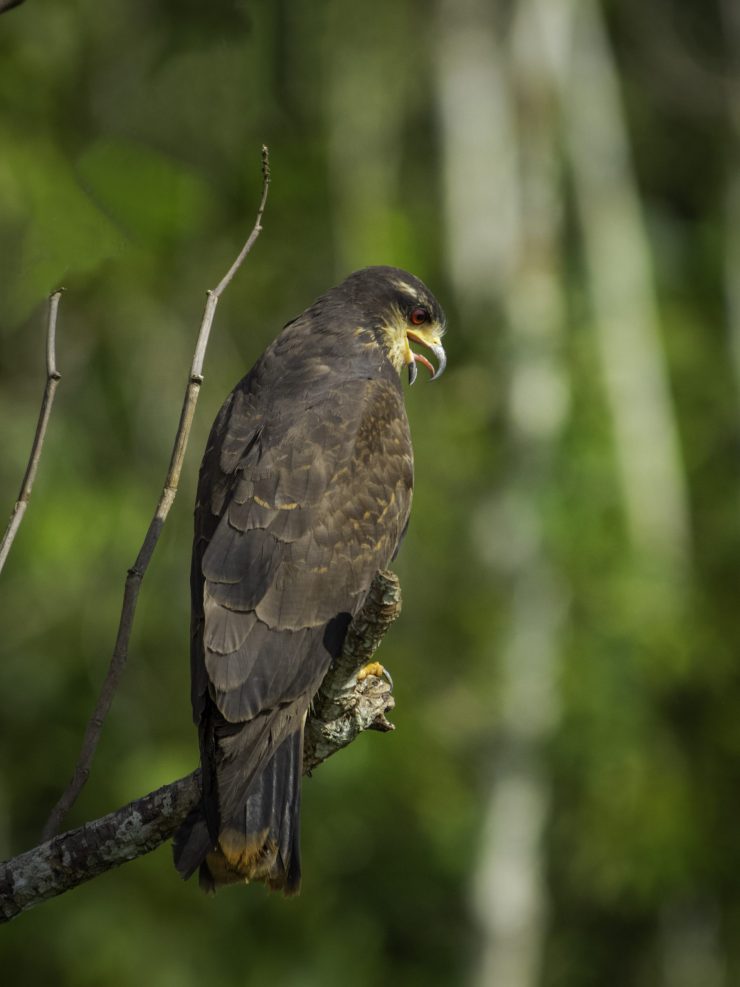 The snail kite (Rostrhamus sociabilis) is a bird of prey within the family Accipitridae, which also includes the eagles, hawks, and Old World vultures. Its relative, the slender-billed kite, is now again placed in Helicolestes, making the genus Rostrhamus monotypic. Usually, it is placed in the milvine kites, but the validity of that group is under investigation.

The adult male has dark blue-gray plumage with darker flight feathers. The legs and cere are red. The adult female has dark brown upperparts and heavily streaked pale underparts. She has a whitish face with darker areas behind and above the eye. The legs and cere are yellow or orange. The immature is similar to adult female, but the crown is streaked.

It flies slowly with its head facing downwards, looking for its main food, the large apple snails. For this reason, it is considered a molluscivore.

Lerner and Mindell (2005) found R. sociabilis sister to Geranospiza caerulescens, and that those two along with Ictinea plumbea were basal to both the buteogallus and buteo clades. They concluded that Rostrhamus belonged in Buteoninae (sensu stricto) and not in Milvinae, but noted that more investigation was needed.

The snail kite breeds in tropical South America, the Caribbean, and central and southern Florida in the United States. It is resident all-year in most of its range, but the southernmost population migrates north in winter and the Caribbean birds disperse widely outside the breeding season.

January-July, deep freshwater swamps, on a 1-4m loose branch platform in bushes or trees above the water, 2-3 whitish, dotted and brown-stained eggs.

It is a sociable bird, generally several can be seen flying over open swamps with characteristic irregular flapping, with head or body tilted laterally. Occasionally goes back

Its diet consists almost exclusively of apple snails. Snail kites have been observed eating other prey items in Florida, including crayfish in the genus Procambarus and black crappie. It is believed that snail kites turn to these alternatives only when apple snails become scarce, such as during drought, but further study is needed. On 14 May 2007, a birdwatcher photographed a snail kite feeding at a red swamp crayfish farm in Clarendon County, South Carolina.

The snail kite is a locally endangered species in the Florida Everglades, with a population of less than 400 breeding pairs. Research has demonstrated that water-level control in the Everglades is depleting the population of apple snails. However, this species is not generally threatened over its extensive range.

In fact, it might be locally increasing in numbers, such as in Central America. In El Salvador, it was first recorded in 1996. Since then, it has been regularly sighted, including immature birds, suggesting a resident breeding population might already exist in that country. On the other hand, most records are outside the breeding season, more indicative of post-breeding dispersal. In El Salvador, the species can be observed during the winter months at Embalse Cerrón Grande, Laguna El Jocotal, and especially Lago de Güija. Pomacea flagellata apple snails were propagated in El Salvador between 1982 and 1986 as food for fish stocks, and it seems that the widespread presence of high numbers of these snails has not gone unnoticed by the snail kite.