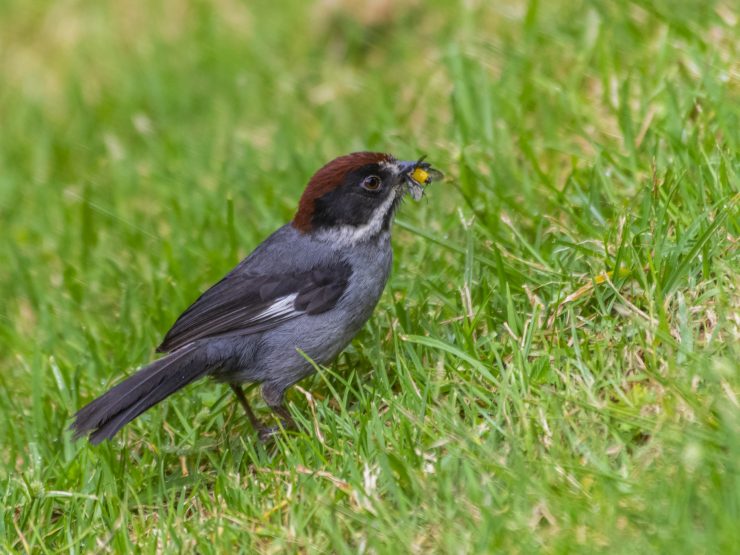 It measures 18 cm. Both sexes similar. The sides of the head are black and the crown is ruffled. Above it is mainly slate gray with slightly darker wings and a small white wing speculum. It also has white mustaches bordered at the bottom by a well-marked black stripe. The middle part of its throat is white like the abdomen, while the rest of the lower parts are gray.

It is considered to form a superspecies with A. seebohmi and A. nationi. Possibly the subspecies taczanowskii represents a different species. Further studies are required to clarify the taxonomic status of this subspecies.

The following are recognized:

A. s. Tamae Cory, 1913 – southwest of Táchira (northwest of Venezuela) and north of Colombia

Difficult to confuse with other Atlapetes, it is the only one with a combination of rufous crown and grayish-white underparts. However, it is very similar to the species just described and of which individuals have not yet been recorded in the field (Atlapetes blancae), which is paler underneath and the black streak of the mustache is much fainter.

This species is found from northwestern Venezuela to southern Peru. In Colombia it is distributed between 1900 and 3700 m above sea level and is found in the Serranía del Perijá and in the Eastern mountain range in the south of Norte de Santander, northeast of Santander, north of Boyacá, southwest of Boyacá and Cundinamarca . Also in the Western and Central mountain range from Antioquia and Norte de Santander south to Nariño.

It inhabits in understory of humid forest, in dwarf forest and thickets up to the limit of the arboreal vegetation near the páramo. You can use forest fragments or continuous forests.

It feeds on insects and fruits.

Individuals in reproductive condition have been recorded in April and September in the Serranía del Perijá and in the extreme north of the three mountain ranges. Also young individuals in April and June in the Puracé National Park.

It is a conspicuous bird that stays in pairs or in family groups of up to 6 individuals. It is observed climbing the branches of small, dense trees. It uses different maneuvers and strata of the forest to obtain its food resources. It is also common in mixed bands