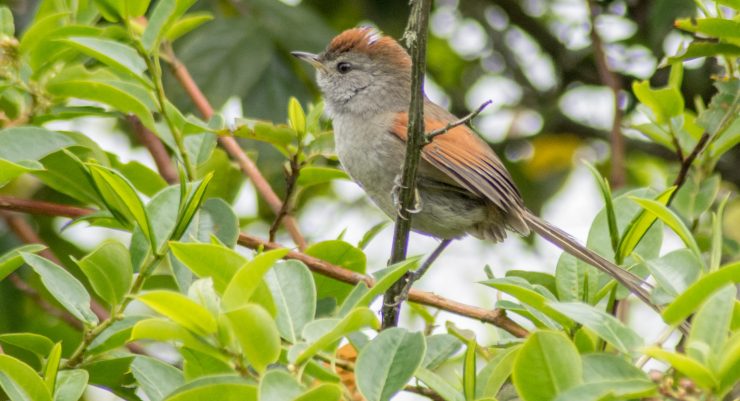 This species is endemic to the eastern Andes of Colombia. Its name Synallaxis comes from the Greek sunallaxis = change, which was assigned by Vieillot (1818) referring to characters that merited recognition as a different gender. The epithet subpudica comes from the Latin sub = something, somewhat and pudicus = modest.

It measures between 17 and 18 cm in length. The tail is long, reaches 10.9 cm long and is grayish brown in color. The reddish-brown or rufous crown and wings contrast with the brown back with greyish to olive hues, the forehead and cheeks gray, the underparts light-gray whitish, shiny on the throat, which has a small black spot.

The species S. subpudica was described for the first time by the British zoologist Philip Lutley Sclater in 1874 under the same scientific name; the type locality is: «Bogotá».

It is distributed throughout the eastern Andes of northern Colombia (departments of Cundinamarca and northern Boyacá).

This species is considered quite common in its natural habitats: the edges of the mountain forests, the clareras with growth of shrubs, bushes and hedges, between 2000 and 3200 m of altitude.

Individuals in reproductive condition have been recorded from July to September. Its nest is a large globular mass 50 to 60 cm high and 30 to 40 cm in diameter which it builds with twigs. It has a side entrance that leads through a cylindrical conduit to an incubation chamber covered with moss and twigs. It builds its nest on a bush approximately 2 m high. In the only nest that has been reported a single egg has been recorded.

It is usually found in pairs. It forages from the ground up to 2 m in height, where it is presumed that it captures its prey by gleaning on branches and on foliage.

It is the sister species of S. brachyura.