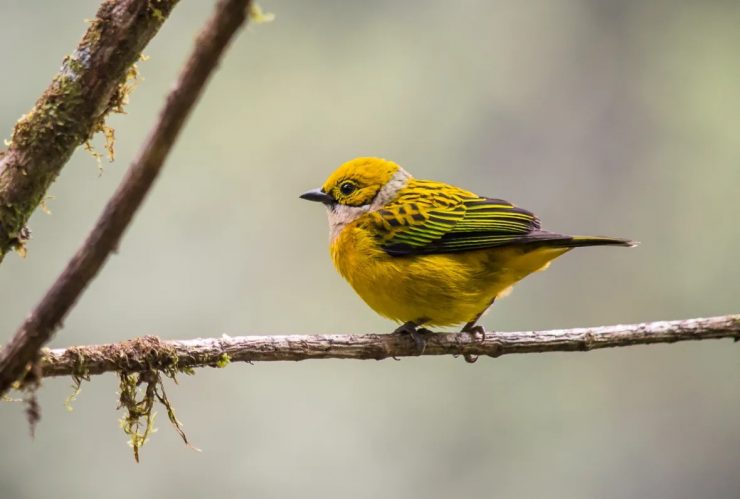 The silver-throated tanager (Tangara icterocephala) is a small passerine bird. This brightly coloured tanager is a resident from Costa Rica, through Panama and western Colombia, to western Ecuador.

The generic feminine name Tangara derives from the word in the Tupi language «tangará», which means «dancer» and was originally used to designate a variety of brightly colored birds; and the species name «icterocephala» is made up of the Greek words «ikterus»: yellow jaundice, and «kephalos»: head.6

The species T. icterocephala was first described by the French zoologist Charles Lucien Bonaparte in 1851 under the scientific name Calliste icterocephala; its type locality is: «Punta Playa valley, south of Quito, Ecuador» .4

Recent extensive phylogenetic studies show that the present species is the sister of Tangara florida, and the pair formed by both is the brother of Tangara arthus.7

According to the classifications of the International Ornithological Congress (IOC) 8 and Clements Checklist / eBird v.20199, three subspecies are recognized, with their corresponding geographical distribution: 9

The adult silver-throated tanager is 13 centimetres (5.1 in) long and weighs 21 grams (0.74 oz). The male is mainly yellow, with black streaks down its back, and a whitish throat bordered above with a black malar stripe. The wings and tail are black with pale green edgings. The sexes are similar, but adult females have duller and greener-tinged yellow plumage, and sometimes dark mottling on the crown. Immatures are much duller and greener, with dusky wings, tail, back streaks and malar stripe, a grey throat and darker green wing edging. The silver-throated tanager’s call is a distinctive sharp buzzy zzeeep. It does not sing.

The compact cup nest is built 1–13 metres (3.3–42.7 ft) in a tree on a branch. The normal clutch is two brown-blotched off-white eggs. This species will raise two broods in a season.